By Cameron Dueck for CNN 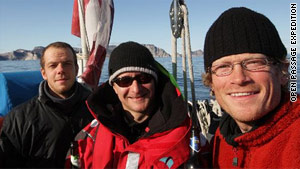 Cameron Dueck (center) and the crew of the Silent Sound after sailing the Northwest Passage.
STORY HIGHLIGHTS
RELATED TOPICS

It was a cold day with pouring rain when she pulled into Halifax Harbor, but there was still a crowd of family and friends waiting to welcome us ashore, reminding us of the community that has formed around the Open Passage Expedition.

We sailed 8,100 nautical miles (15,000 kilometers) and spent two of our four months above the Arctic Circle. We spent on average more than four days a week at sea throughout the entire summer. We ran into ice, storms and days without wind that left us frustrated and behind schedule.

Click here to read more about the Silent Sound's adventures

But numbers and facts and logbook entries will never be able to tell the real story of this voyage.

Sailing through the Northwest Passage without assistance was our primary goal. Ice, bad weather and a lack of support in this remote part of the world made it challenging, but we succeeded.

Our secondary goal was to learn more about the people that live in the Arctic, and tell their story of how climate change is impacting their lives. We only had one summer in the Arctic, so we couldn't see the change happening ourselves or become experts in Arctic issues.

Gallery: see pictures from the voyage

But we met many people with the knowledge we lacked, and we learned from them. Many people opened the doors to their lives so we could learn more about how their world is changing.

And what they said taught us that there are real, significant changes taking place in their lives because of climate change. Changes that threaten their ways of hunting, their culture and their food supply.

This summer brought a third straight year of rapid melting, putting the sea ice coverage at well below the 30-year average. We saw only the remnants of the sea ice that normally covers the water, but this ice is core to the lives of the people who call the Arctic home, and it is hard to over emphasis the impact of its melting.

That said, any amount of ice is frightening when you are at the helm of a small yacht, and although more yachts will follow, this remains one of the most challenging sailing routes on the globe.

Our journey also shattered our romantic notions and stereotypes. This is a region struggling to bridge a cultural gap and keep up with the changes around it.

Seeing their lives from afar and making judgments on how they hunt, socialize and operate their communities will not help solve their problems, climate change related or not.

Understanding the Arctic and the Inuit is something we can never claim to have done in a summer, but we saw enough to know that we need to learn more.