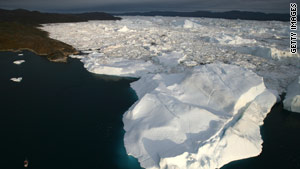 The melting of ice caps in Greenland and the Antarctic could mean sea levels rising by 0.5 meters, the report says.
STORY HIGHLIGHTS

London, England (CNN) -- A possible rise in sea levels by 0.5 meters by 2050 could put at risk more than $28 trillion worth of assets in the world's largest coastal cities, according to a report compiled for the insurance industry.

The value of infrastructure exposed in so-called "port mega-cities," urban conurbations with more than 10 million people, is just $3 trillion at present.

The rise in potential losses would be a result of expected greater urbanization and increased exposure of this greater population to catastrophic surge events occurring once every 100 years caused by rising sea levels and higher temperatures.

The report, released on Monday by WWF and financial services Allianz, concludes that the world's diverse regions and ecosystems are close to temperature thresholds -- or "tipping points."

Any one of these surge events could unleash devastating environmental, social and economic changes amid a higher urban population.

According to the report, carried out by the UK-based Tyndall Centre, the impacts of passing "Tipping Points" on the livelihoods of people and economic assets have been underestimated.

Global temperatures have already risen by at least 0.7 degrees Celsius and the report says a further rise by 2-3 degrees in the second half of the century is likely unless deep cuts in emissions are put in place before 2015.

The consequent melting of the Greenland and the West Antarctic Ice Shield could lead to one such tipping point scenario, possibly a sea level rise of up to 0.5 meters by 2050.

The report focuses on regions and phenomena where such events might be expected to cause significant environmental impacts within the first half of the century.

For example a hurricane in New York, which could cost $1 trillion now, would mean a $5 trillion insurance bill by the middle of the century, the report adds.

"If we don't take immediate action against climate change, we are in grave danger of disruptive and devastating changes," said Kim Carstensen, the Head of WWF Global Climate Initiative.

"Reaching a tipping point means losing something forever. This must be a strong argument for world leaders to agree a strong and binding climate deal in Copenhagen in December."