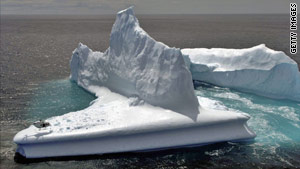 The icebergs off the New Zealand coast in 2006 (pictured) provided a mini-boom for tourism and helicopter companies.
STORY HIGHLIGHTS
RELATED TOPICS

More than 100 icebergs that were first spotted off the coast of Macquarie Island, an Australian territory around 900 miles south east of Tasmania, are now thought to be only 200 miles away from New Zealand's south coast.

This is only the second time in 78 years that large Antarctic icebergs have been sighted so far north.

The previous occasion was in late 2006 when icebergs could be seen from the eastern coast of New Zealand's South Island, even from the hills around Christchurch.

According to National Institute of Water and Atmospheric Research (NIWA), which is tracking the icebergs by satellite, the largest one is thought to be 500 meters wide, 50 meters tall and with a total thickness of 350 meters.

There are an estimated 100 main icebergs heading for New Zealand and possibly hundreds of smaller ones that form around them as they break up.

Only around 10 percent of an iceberg is visible above the water level, making them a hazard to shipping. In response Maritime New Zealand issued an alert to shipping in the area, which is home to many deep-sea fishing fleets as well as cruise ships and cargo freighters that port in Invercargill on the southern coast of New Zealand.

"While the size of the icebergs has attracted a lot of attention, it is not unusual for icebergs to be found in these waters," a spokesperson for Maritime New Zealand told CNN, who continued to say that alerts for smaller icebergs are not uncommon.

But a half-kilometer wide iceberg visible from New Zealand's coast would represent a very rare occurrence.

It is thought that the current flotilla of icebergs came off the Ross Ice shelf between 2000 and 2002, the same period that produced the 2006 icebergs.

The question now is what caused the huge fresh water icebergs to break off from an Antarctic Ice shelf and what has allowed them to travel so far north.

"A lot of people are saying it was due to a very cold snap a few years ago in Antarctica that caused more ice than usual and the outer regions of that ice snap off each summer," said Duncan.

"It's too hard to say whether it's global warming. We're really looking at an isolated incident. These things move very slowly and they take a long time to circle around the Antarctic. It takes a certain current and wind direction to bring them up to New Zealand.

"It may be we've just seen a particular weather pattern repeat itself over the past few years, which means we've seen icebergs [off the New Zealand coast] twice, or it may be something bigger. But I wouldn't put it down to global warming just yet," said Duncan.

The currents that have taken the icebergs so far north mean that their now doomed to melt in warmer waters. NIWA estimate that the bigger icebergs will last between six and eight weeks depending on where they go.

If the 2006 occurrence is any guide the icebergs could provide a mini boom for tourism in southern New Zealand.

Three years ago light aircraft companies provided viewing flights and helicopters businesses landed visitors on some of the larger icebergs. In a publicity stunt for a New Zealand wool company a prize sheep was shorn on one of the massive floating pieces of ice.