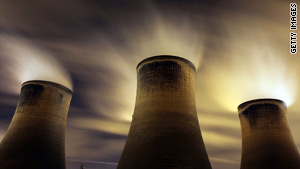 Used on a large scale the new 'gasification' technique could save hundreds of millions of tons of CO2 emissions.

(CNN) -- The world has taken a step closer to "clean coal," thanks to new technology that actually uses CO2 to make power generation more efficient.

The research by scientists at Columbia University means that millions of tons of CO2 could be prevented from entering the atmosphere and instead used to turn coal, biomass and municipal waste into cleaner fuel.

This remarkable double hit is based on a well-established process called "gasification" that is already used to clean "dirty" fuels by heating them with steam and turning them into a mixture of hydrogen and carbon monoxide, known as syngas. In turn, that is then burned in power stations or used to create transport fuels.

But until now this process has demanded very large amounts of energy and water, and produced substantial CO2 emissions.

However, the Columbia researchers have shown that by actually adding CO2 into the mix and replacing some of the steam, the reaction becomes dramatically more efficient and much cleaner.

"We can make efficiency savings of 25 to 30 percent," assistant professor Marco Castaldi, who led the research, told CNN.

"The process is operated in a very similar way to a conventional gasifier, in that we take the biomass and mix it with some steam... But that's where the similarities end, because instead of just using steam, we also used CO2, which serves two major purposes.

"Firstly it reacts with the biomass a little better than steam. Secondly, because it does a good job, it reduces the amount of steam needed, which saves energy and water. It's a two-fold hit."

After the hydrogen is removed from the syngas, the remaining carbon monoxide can be safely burned underground.

This is what engineering does best, developing processes that can extract value from unwanted materials to help make the world a better place
--Marco Castaldi

In an article published in Journal of Environmental Science & Technology in November, Castaldi and his team show that if their gasification techniques was applied to a biomass such as beechgrass, and this was being used to fuel a fifth of the world's transport, 437 million tons of CO2 would be used, the equivalent of taking 308 million vehicles off the road.

Castaldi has led experiments on over 50 different kinds of biomass and achieved broadly similar results and the new gasification process is applicable to almost any high carbon solid fuel -- from bark and pine needles to grass and coal.

"All of these fuels are a high carbon base, and the CO2 is taking that carbon and working on it," he said.

Castaldi is convinced his technique can offer cleaner and more efficient power generation, even when applied in "real world" scenarios.

"The study that was published was based on lab work," he said.

"But we've tested it on a much larger scale, and as we scale it up, we see the same results in terms of better efficiencies and processing...

"One big question for us was, OK, we can prove you get an efficiency gain in the gasifier of about 25 percent. But the gasifier is only one part of the overall process in, say, a power plant... But we found that when you put [our techniques] into a much larger system, you still see an improvement of 3 or 4 percent.

"That might seem small, but a power plant is hundreds and hundreds of megawatts, so although it's a small percentage, it's still a huge amount.

"One thing that is often overlooked -- a lot of energy systems use a lot of water, and for every percentage of CO2 I use that's one less percentage of water.

"I can see that within five years we could have a fully functional gasifier deployed ... I think initially this type of technology could be retrofit to existing systems -- we could use flue gas to provide CO2... I can easily see this thing being operational on a plant somewhere."

Castaldi believes that one of the major obstacles to the adoption of his techniques is human, rather than scientific.

"When you look at power generation then there is a lot of entrenched knowledge and entrenched technology," he said.

"There are many factors that influence how fast these things get taken up.

"But if you just look at the economics and the scale, and you say you can get a three, four or five percent efficiency, then yes, [power companies] should be very interested."

Castaldi's research group has already had angel investment to create a process development unit, as well as support from the US Electro Power Research Group, and says there are others he is in discussions with.

"To have this piece of knowledge noticed is wonderful," he said.

"Not just for me or my research group... everyone is taking about CO2 capture and sequestration at the moment, but this is actually a way of using it."

"Hopefully these findings will stimulate people to think about utilizing CO2 and other waste streams to make chemicals and products that society wants," Castaldi told Columbia University's Global Impact.

"This is what engineering does best, developing processes that can extract value from unwanted materials -- to help make the world a better place."