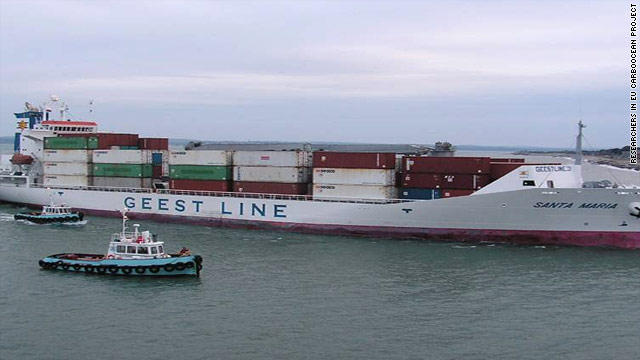 Vessels such as the M/V Santa Maria, which carries bananas between the Caribbean and the UK, are fitted with sensors.
STORY HIGHLIGHTS
RELATED TOPICS

London, England (CNN) -- An international team of scientists has developed a new method of measuring the absorption of CO2 by the oceans that could become an "early-warning system" for climate change.

Using a network of ships carrying chemical sensors combined with satellite observations of sea surface temperature, the team from the University of East Anglia in eastern England mapped the uptake of atmospheric CO2 by the entire North Atlantic Ocean.

The theory is that scientists will be better able to detect any weakening of ocean sinks -- natural reservoirs which store carbon -- seen as a first signal of more pronounced climate change.

Oceans and rainforests absorb more carbon dioxide than they emit. Crucially they absorb about half the CO2 humans release into the atmosphere. Changes in atmospheric and oceanic temperature will affect how this CO2 is stored, released and transported around the globe.

"We've known for some time that not all CO2 is absorbed by the Earth's atmosphere," Professor Andrew Watson, who led the research, told CNN.

"But this study, which has been four years in the making, is the first time we've been able to measure accurately how much is going into a large area of the ocean or land.

Video: Is it warmer or not?

"This method, using ordinary commercial vessels operating along busy shipping routes, has enabled us to do this in a very cost-effective way."

According to Watson, the results of the study suggest CO2 absorption in the North Atlantic "varies substantially over periods of several years and is sensitive to regional changes in climate."

"We've seen that the flux actually builds up between 2002 and 2005 in the central areas of the North Atlantic. But in 2006 and 2007 it drops down again. This is very interesting because we didn't expect it to oscillate so much.

"Although we don't yet know why this is happening, we can now accurately pinpoint any future changes in the ocean's carbon uptake early on."

Some scientists warn the oceans are already struggling to cope with human carbon emissions generated since the beginning of the industrial age.

"The more carbon dioxide the ocean absorbs, the more acidic it becomes and the less carbon dioxide it can absorb," Samar Khatiwala, a scientist at the Lamont-Doherty Earth Observatory of Columbia University, told the New York Times.

Researchers at the University of East Anglia's School of Environmental Sciences hopes similar networks can be established in other major ocean basins well-covered by shipping.

"It'll be like creating the kind of network we have for weather forecasting," Watson said.

"If we can extend the study to cover the North Pacific region, we'll have a very powerful tool that will enable us to specify what is happening across the entire northern hemisphere."

Meanwhile, the head of the University of East Anglia's (UEA) Climatic Research Unit (CRU) has said he will step down from the post while a review is carried out into claims climate data was being manipulated.

This unit was not directly involved in the North Atlantic study.

According to media reports, emails exchanged between climate experts at the university were hacked and leaked onto the Internet. The material was then published on Web sites run by climate change skeptics.

In a statement on the university's Web site, Professor Phil Jones said he stands by his data and that "one has to wonder if it is a coincidence that this email correspondence has been stolen and published at this time.

Read more about the controversy

"This may be a concerted attempt to put a question mark over the science of climate change in the run-up to the Copenhagen talks."

He added: "Our global temperature series tallies with those of other, completely independent, groups of scientists working for NASA and the National Climate Data Center in the United States, among others.

"Even if you were to ignore our findings, theirs show the same results. The facts speak for themselves; there is no need for anyone to manipulate them."