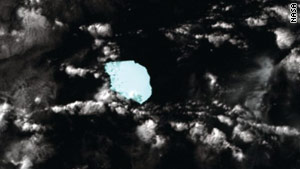 Satellite image of the iceberg south west from West Australian coast on November 5.

The iceberg, measuring 140 square km (54 square miles), cleaved off an ice shelf nearly 10 years ago and had been floating near Antarctica before commencing on its unusual journey north.

Named B17B, it was about 1,700 km (1,056 miles) off the coast of West Australia, according to the country's Antarctic Division.

"B17B is a very significant one in that it has drifted so far north while still largely intact," said Australian Antarctic Division glaciologist Neal Young, who spotted the slab using satellite images taken by NASA and the European Space Agency.

"It's one of the biggest sighted at those latitudes."

It is unlikely to drift too close to the coast in its current form, Young said. The warmer waters will cause it to melt.

"As the water warms up, the iceberg is slowly breaking up, resulting in hundreds more smaller icebergs in the area," Young said on the Australian Antarctic Division Web site.

In November, an iceberg estimated to be 500 meters wide and 50 meters high was spotted close to Macquarie Island in the southern Pacific drifting towards New Zealand.

Scientists working on the island were astounded by its size.

"We pulled out the binoculars that we use for work on the seals and, sure enough, it was a huge floating island of ice basically and, yeah, it was an incredible sight," Australian researcher Dean Miller told CNN affiliate TVNZ.

The Australian Antarctic Division said the iceberg was part of a flotilla that would have broken off from a larger ice flow that possibly came from the Ross Ice Shelf, Antarctica's largest.

Although shipping lanes in this region are not particularly busy in November, the icebergs prompted Maritime New Zealand to issue navigation warnings.

Three years earlier, another family of icebergs led to a small tourist boom when they drifted along the east coast of New Zealand's South Island.

Oceanographer Mike Williams told Radio New Zealand the icebergs had "pretty much the same origin" but that some had probably been trapped in the icy seas of Antarctica for longer, before being carried north by the currents.

However he was reluctant to cite global warming as the reason for the large-scale movement of ice. "We do have to a change our position a little because in 2006 we thought this was a 'once in a lifetime' event.

"But large ice shelf carvings, where the ice comes from, are still only carving on a 30 to 50-year period."