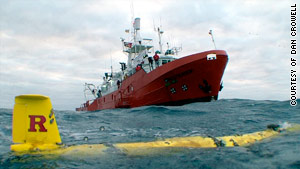 An unmanned mini-sub made the first ever trans-Atlantic crossing.

Madrid, Spain (CNN) -- A U.S.-built, unmanned mini-submarine on an ocean research mission has successfully crossed the North Atlantic by gliding on underwater currents, U.S. officials said Wednesday in Spain, where they came to retrieve it.

The ocean crossing is thought to be a first for the robotic device that looks like a small torpedo with wings, and was powered only by batteries that allowed it to change buoyancy so it could catch ocean currents.

A similar effort in 2008 failed and the device was never recovered.

The underwater glider, spearheaded by Rutgers University in New Jersey and funded in part by the National Oceanic and Atmospheric Administration, measured ocean water temperature and salinity during its seven-month journey.

It frequently surfaced to send back this data from an onboard computer to satellites.

The mission has potential implications in the fight against global warming, because conditions under the surface in the North Atlantic are considered to be directly related to weather patterns over Western Europe.

Rutgers University has made the ocean data, already sent from the glider, available for global weather modeling, but the glider's data alone would not be able to determine if the North Atlantic has warmed beyond normal, said Josh Kohut, a Rutgers professor.

"We now need to implement a strategy" that would send out gliders for longer periods, to more places, to help answer those broader questions that are part of the climate change debate, Kohut said.

The seven-foot long, 135-pound glider, with a hull of anodized aluminium, left New Jersey last April and was picked up by researchers off the northwest Spanish port of Baiona last Friday.

It had ridden underwater currents for 221 days for a distance of 7,410 kilometers (4,594 miles). The cost of the journey, including the construction of the glider, totaled about $200,000.

Spain's Development Minister, Jose Blanco, presented the glider on Wednesday to Jerry Miller, a scientific adviser to President Barack Obama, at a ceremony in Baiona.

Similar underwater gliders have been in use for about a decade along the coastal United States, but none has ever completed an Atlantic crossing, said Ken Branson, a Rutgers University spokesman.

The glider's ocean data complements other ocean weather tracking systems, including from satellites and fixed sea-floor sensors, or researchers' trips aboard ships.

The difference with this glider, which can dive to 200 meters, or 640 feet, Branson said, is "getting information more quickly and making sense of it more quickly. It's like being able to 'see' in three dimensions instead of two."

A similar glider is currently operating off of Antarctica, Branson said.

The glider was coated with a special paint -- yellow so it would stand out in the ocean depths, and slick to the touch, in order to discourage barnacles and other sea life from hitching a ride on it and potentially wrecking the mission.

Rutgers dubbed the glider the "Scarlet Knight," after the school's mascot.