(CNN) -- International scientists have announced the discovery of a tiny moon orbiting Saturn. 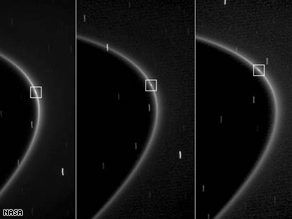 The speck of light, captured by cameras on board the Cassini spacecraft, was first observed on August 15.

The speck of light, captured by cameras on board the Cassini spacecraft, was first observed on August 15. A review found the moonlet on two earlier images and it has since been seen on multiple occasions.

The finding appeared in Tuesday's edition of the International Astronomical Union circular.

The moon is about one-third of a mile (a half-kilometer) across and circles Saturn as a part of the planet's sixth, or G, ring.

"Before Cassini, the G ring was the only dusty ring that was not clearly associated with a known moon, which made it odd," said Matthew Hedman, a Cassini imaging team associate at Cornell University in Ithaca, New York. "The discovery of this moonlet, together with other Cassini data, should help us make sense of this previously mysterious ring."

Early next year, Cassini's camera will take a closer look at the moonlet. The Cassini Equinox mission, an extension of the original four-year mission, is expected to continue until fall 2010. If the craft continues to function properly, the mission could be extended up to two more years.

Cassini, which was funded by NASA and the European and Italian space agencies, launched in 1997 and took seven years to make the 934 million-mile (1.5 billion-kilometer) trip to Saturn.

Since its arrival, Cassini has been making a looping voyage through the Saturn system and is returning loads of data on the ringed planet and its moons.

Three years ago, a space probe launched from Cassini found evidence of geysers erupting from underground pools of liquid water on Saturn's moon Enceladus. High-definition pictures beamed back from the probe showed huge plumes of ice coming from the moon's south pole.

All About Cornell University • NASA