KENNEDY SPACE CENTER, Florida (CNN) -- The space shuttle Discovery landed safely at Kennedy Space Center on Saturday, completing a 13-day mission that included expanding the number of astronauts who can live aboard the International Space Station. 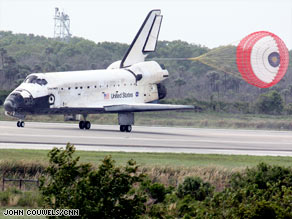 The shuttle touched down at about 3:14 p.m. ET. NASA had scrubbed an earlier planned landing, citing high winds.

"It was a beautiful landing," said NASA launch manager Leroy Kaine. "About the only thing that beats a beautiful orbiter landing like this is the next launch."

Discovery and its seven-member crew lifted off from the Kennedy Space Center in Cape Canaveral, Florida, last Sunday, to continue work on expanding the international space station's crew capacity from three to six.

Joining the shuttle's seven-member crew on the return flight was astronaut Sandy Magnus, who spent 129 days aboard the space station.

In her place, Discovery dropped off Koichi Wakata, who is the first Japanese astronaut who will spend an extended time on the station.

NASA officials said Magnus appeared to be in good physical condition after her four-month stint in space.

It was Discovery's 36th voyage and the 125th space shuttle mission in the program's history.

The official mission time was 12 days, 19 hours, 31 minutes and one second, according to NASA. The trip covered 5.3 million miles.

On Thursday, a pair of astronauts from Discovery safely completed a six-hour spacewalk outside the space station, installing a set of solar panels that will help the station handle twice as many crew members.

The crew also worked Thursday to make sure members of the space station stay physically fit -- repairing a treadmill and exercise bicycle that had broken down, Alibaruho said.

The other work the astronauts did during their visit to the station was collecting water samples for testing back on Earth. The water is processed urine and sweat that was treated with a new filtration system. If toxicology tests come back negative, the astronauts aboard the station will be given the go-ahead to drink the processed water.

At a briefing after the landing, NASA officials were pressed on one other space-station-related issue -- the naming of a newly built wing.

In an online poll soliciting names for the wing, NASA was surprised when fans of late-night talk show host Stephen Colbert wrote in his name enough times to take away the top spot from the leading vote-getter among NASA's suggestions -- Serenity.

"We're still thinking about it," Gerstenmaier said. "We have a plan and we're working with some folks. In a couple of weeks, you'll know what the answer is."

NASA never guaranteed that the winner of the poll would be the pod's name.