(CNN) -- Dare to fall into a black hole and you would get vaporized in what is probably the most violent place in the universe. But the journey would yield some amazing sights, though you might need three eyes for the best view of what's going on, new research suggests. 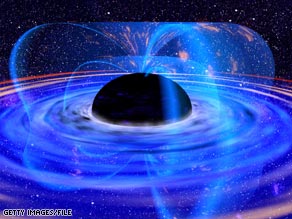 This image shows an artist's impression of a supermassive black hole at the center of galaxy MCG-6-30-15.

Humans have only gotten close to black holes in sci-fi books and movies.

In fact, astronomers can't even see black holes directly, though there is strong evidence millions of them exist in our galaxy alone.

Scientists can try to simulate a trip inside with the help of equations in Albert Einstein's general theory of relativity, which make predictions about black hole behavior, said Andrew Hamilton, a professor of astrophysics at the University of Colorado at Boulder.

"Black holes are some of the simplest things in the universe. We think of them as being complicated things because they're described by complicated mathematics," Hamilton said.

Hamilton and Gavin Polhemus, a physics teacher in Fort Collins, Colorado, set out to visualize what an "infaller" might see if he or she were swallowed by the supermassive black hole at the center of the Milky Way. The results are described in a recent paper and shown in a simulation that took more than 100,000 lines of computer code to create.

Watch what you might see inside a black hole »

Black holes form when massive stars run out of nuclear fuel, collapse and become so compressed and dense that not even light can escape their gravitational pull.

Hamilton also described them as places where space is falling faster than light.

"I think of a black hole as rather like a waterfall, except it's not a fall of water but rather a fall of space," he said. "Even light itself, which is struggling to get out, pointed away from the black hole, will find itself dragged inward, like doing a Michael Jackson moonwalk."

To be sucked in by a black hole, you need to reach its event horizon, the one-way boundary beyond which nothing can escape. The more massive a black hole, the bigger this point of no return around it, said Jeff McClintock, a senior astrophysicist at the Harvard-Smithsonian Center for Astrophysics.

Approaching the horizon, you would notice nothing special, but someone observing you from the outside would see you freeze in place and become a lot dimmer because light that you emit at the boundary takes a long time to get out, Hamilton said.

Many people think you would be engulfed in darkness when you fall in, but that is a common misconception, Hamilton points out. The view of the outside universe would become distorted, but would not disappear.

Once you pass the horizon -- or go over Niagara Falls, in the waterfall analogy -- you would be falling faster than the speed of light toward the black hole's center -- called a singularity -- and feeling the effects, Hamilton said.

"The gravity at your feet is stronger than the gravity at your head, as long as you fall in feet first. ... You feel this difference in gravity between your feet and your head as a tidal force, which pulls you apart vertically in a process called 'spaghettification,' " Hamilton writes on his Web site.

"At the same time as you are pulled apart vertically, you are crushed in the horizontal direction, like a rubber band being pulled. So if you would like to be taller and thinner, then one way to achieve that is to fall into a black hole."

The same force ripping you apart would also concentrate the view of the universe into a thin band around your waist. It would cause the scene above and below you to appear redshifted, or dimmer, and the light around your waist to become blueshifted, or very bright, Hamilton said.

You may also regret that you only have two eyes. In a strange twist, Hamilton and Polhemus argue that three eyes would be needed to properly judge distances inside a black hole, where space-time is highly curved and our binocular vision would become confused.

Even a third eye wouldn't help you see the black hole's center, however, because all light is headed toward the singularity and none away from it, Hamilton writes on his Web site.

"What you see is the outside universe appear to be squashed down into a thin plane, dark above and dark below, bright in this very thin plane," Hamilton said. "In [the singularity], the curvature of space-time goes to infinity, the tidal forces go to infinity, everything gets ripped apart and space and time as we know them come to an end."

It's fun to imagine what might happen in a black hole, but people should remember that any journey inside the event horizon is based on pure theory, McClintock said.

Anyone worried about Earth being swallowed by a black hole should also be relieved to know the closest one astronomers know about is 3,000 light years away, which McClintock called a "super, super, super safe" distance. He added that we wouldn't be sucked in even if the sun, which is only 8 light minutes away from Earth, were suddenly replaced by a black hole of the same mass.

"All the planets would keep going around just the same. ... Nothing would change except there wouldn't be any light and heat," McClintock said.

"There would be no attempt by the black hole to suck us in any more than the sun sucks us in. It's only when you get really, really close that all the bizarre things happen."

All About Astronomy • Astrophysics