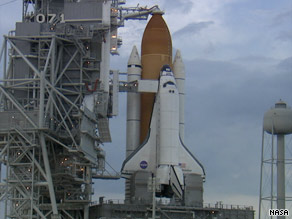 Space shuttle Endeavour is shown Monday shortly after the day's launch was called off.

Monday's attempt was scheduled for 6:51 p.m., but storm cells with lightning were within 20 nautical miles of the launch area, violating safety guidelines, NASA said.

"The vehicle and our teams were ready, but the weather has just bitten us again," launch director Pete Nickolenko told the shuttle crew.

"We understand, Pete. That's the nature of our business," Mark Polansky, shuttle commander, responded. "Like we said before, when the time is right, we'll be here and we'll be ready."

NASA said it will next try to launch Endeavour at 6:03 p.m. Wednesday.

On Friday, 11 lightning strikes hit within a half-mile of the launch pad, scratching Saturday's launch.

Endeavour, carrying seven astronauts and a key component for Japan's Kibo science laboratory, is to head to the international space station for a 16-day mission.

The Kibo science lab, also called the Japanese Experiment Module, is Japan's first human space facility, and has been more than 20 years in the making.

Five spacewalks are planned for the crew after the shuttle docks, but because of the launch delays, Endeavour, if it is able to lift off Wednesday, will have to undock earlier than planned because of the planned arrival of the Russian re-supply ship Progress, launch integration manager Mike Moses told reporters.

No mission tasks would be removed to account for Endeavour's early undocking, but some tasks, such as stowing and repacking things aboard the shuttle, would be done after undocking instead of before, Moses said Monday evening.

"That will let us basically undock in time for Progress to come [and] keep our full 16-day mission," Moses said.

However, if Endeavour's Wednesday launch were to be postponed to Thursday, the shuttle crew would drop the fifth spacewalk, Moses said.

If Wednesday's launch is scrubbed, Thursday would be the next opportunity. However, showers and thunderstorms are expected in the launch area, and there is a 60 percent chance that weather would prevent takeoff that day, McCormick said.

If Endeavour isn't able to launch by Thursday, NASA would wait until July 26 before trying again, Moses said.

All About Space Shuttle Endeavour • NASA