(CNN) -- It's the biggest meeting ever so far from Earth. 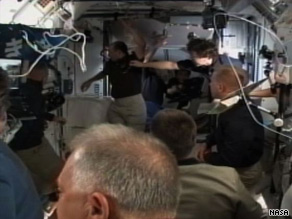 Crew members of the international space station greet space shuttle astronauts as they arrive after docking.

Shortly before 4 p.m. ET Friday, the seven crew members of the Space Shuttle Endeavour opened a hatch and entered the international space station, where they greeted the six crew members who were already there with hugs.

"It's pretty exciting to have 13 crew members aboard the International Space Station," said ISS Flight Engineer Koichi Wakata, a Japanese astronaut who is slated to return to Earth aboard the shuttle.

The space station's crew was expanded to six less than two months ago, after the latest module was added. Prior to that, its standard crew size was three.

The Endeavour docked with the space station at 1:47 p.m. ET on the 34th anniversary of the Apollo-Soyuz Test Project's docking, the beginning of U.S. and Russian cooperation in space.

During the traditional welcome ceremony, station Commander Padalka rang a bell, signaling the shuttle's arrival. "This is a remarkable event for the whole space program," he said.

Said Endeavour Commander Polansky: "Thirteen is a big number, but we are thrilled to be here."

The newcomers then got a safety briefing and a tour from the space station veterans.

The Endeavour lifted off Wednesday on a 16-day mission, carrying a key component for Japan's Kibo science laboratory. Also called the Japanese Experiment Module, Kibo is Japan's first human space facility and has been in the making for more than 20 years.

NASA engineers are tracking a piece of space junk located about two days away from the shuttle that could be a problem, Lead Flight Director Paul Dye and Shuttle Program Manager John Shannon told reporters Friday.

They said they were trying to figure out whether the object poses a threat to the shuttle and whether they will need to maneuver the shuttle out of its path.

But they expressed satisfaction after looking at close-up photographs of the craft's bottom that the shuttle appears to have suffered no major damage during liftoff Thursday, despite having shed some foam.

NASA planned a minor reboost of the International Space Station to ensure plenty of clearance. The shuttle was to fire its rocket thrusters for 15 minutes to help steer the space station complex away from the orbiting space junk.

The first spacewalk is planned for around noon ET on Saturday and should last until 6:30 p.m., they said.