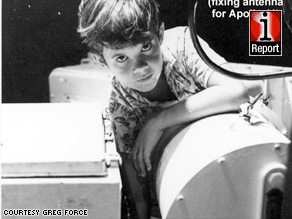 At age 10, Greg Force reaches his arm into a tiny hole to fix an antenna crucial to Apollo 11.

It sounds like something out of a movie, but that's what it came down to as Apollo 11 sped back towards Earth after landing on the moon in 1969.

It was around 10:00 at night on July 23, and 10-year-old Greg Force was at home with his mom and three brothers. His father, Charles Force, was at work. Charles Force was the director of the NASA tracking station in Guam, where the family was living.

The Guam tracking station was to play a critical role in the return of Apollo 11 to Earth. A powerful antenna there connected NASA communications with Apollo 11, and the antenna was the only way for NASA to make its last communications with the astronauts before splashdown. But at the last minute on that night, a bearing in the antenna failed, rendering it nearly useless.


To properly replace the bearing would have required dismantling the entire antenna, and there was simply no time. So Charles Force thought of a creative solution: If he could get more grease around the failed bearing, it would probably be fine. The only problem was, nobody at the station had an arm small enough to actually reach in through the two-and-a-half inch opening and pack grease around the bearing.

And that's when Greg was called in to save the day. Charles Force sent someone out to his home to pick up Greg. Once at the tracking station, Greg reached into the tiny hole and packed grease around the failed bearing. It worked, and the station was able to successfully complete its communications role in the mission. Apollo 11 splashed down safely the next day.

At the time, Greg didn't think what he was doing was a big deal, and 40 years later, he's still modest about his role in the mission.

"That's all I did, was put my hand in and put grease on it," he says. If he hadn't been there, NASA would not have been able to make its last communications with the mission before splashdown, but Greg says "it wasn't life or death, [from] my understanding."

"My dad explained to me why it was important," he says, "but it kind of caught me by surprise afterwards, all the attention." iReport.com: Read Greg's firsthand account

That attention came from the media and even the astronauts themselves. Greg's small but important part in Apollo 11 was a story told by news outlets around the world. He even got a nice thank-you note from Neil Armstrong, whom he met when Armstrong went on a tour of NASA stations with the other astronauts to thank the staff after the mission. "To Greg," reads the note, which Armstrong wrote on a newspaper clipping of Greg's story, "with thanks for your help on Apollo 11. Neil Armstrong."

Perhaps not surprisingly, like many other kids who grew up during the Apollo era, Greg dreamed of becoming an astronaut. He says he remembers visiting his dad's office to listen to astronauts communicating with NASA officials on the ground.

"We could sit and listen to the actual communication with the astronauts as it was happening, and it was hard to understand, but I loved to do that," he says. "On Guam we didn't have good television coverage, so I think I listened to the [moon] landing on the radio. To me it was a huge thing."

Greg pursued his dreams of space exploration all the way through college, where he majored in physics. Unfortunately, he was unable to pass the vision test for the space program because of his colorblindness, but even that couldn't squelch his interest. Greg went on to get his pilot's license, and even though his career now as a gymnastics school owner isn't exactly space-related, he says that "ever since then, I've followed the space program."

And as a lover of space exploration, Greg hopes to see more missions to the moon.

"I think it would be an important step as far as going further, like to Mars," he says. "I would love to see us go back to the moon."

But for now, on the 40th anniversary of the moon landing, he can remember the small but crucial role he played in bringing Apollo 11 home safely.

"It kind of caught me by surprise," he says, "but I'm real proud to have been even a little tiny part of it." iReport.com: See more photos of Greg with his father and Armstrong