(CNN) -- In an unusual step, NASA scientists interrupted testing of the refurbished Hubble Space Telescope to aim the orbiter's camera at Jupiter and capture an image of the planet's mysterious new scar. 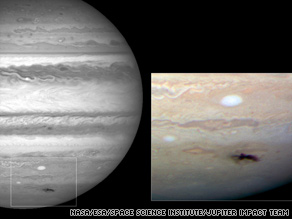 The revamped Hubble telescope captured these images of an impact scar near Jupiter's south pole.

The resulting picture, taken Thursday, is the sharpest visible-light photo of the dark spot and Hubble's first science observation since astronauts repaired and upgraded it in May, NASA said.

Earth-based telescopes have been trained on Jupiter since an amateur astronomer in Australia noticed the new mark, probably created when a small comet or asteroid plunged into Jupiter's atmosphere and disintegrated, early Monday.

But in its rarified orbit 347 miles above the Earth, the Hubble has a better view of the gaseous planet.

This week's event marks only the second time scientists have recorded debris colliding with Jupiter, the fifth planet from the sun and the largest in our solar system. The appearance of the impact spot is changing day to day in the planet's cloud tops, making it a priority for scientists to document it quickly.

Although the Hubble is not expected to resume full operations until late summer and its new camera is still being calibrated, NASA scientists decided the Jupiter event was too significant not to put the orbiting observatory back into action for a day.

"Because we believe this magnitude of impact is rare, we are very fortunate to see it with Hubble," said Amy Simon-Miller of NASA's Goddard Space Flight Center in Greenbelt, Maryland. "Details seen in the Hubble view shows a lumpiness to the debris plume caused by turbulence in Jupiter's atmosphere."

The object created a mark on Jupiter that has about same diameter as Earth, though the object itself was probably only 50 to 100 miles across, said Anthony Wesley, the astronomer who first noticed the scar.

The mystery object was probably moving at speeds of about 50 to 100 kilometers (31 to 62 miles) per second when it struck near Jupiter's south pole, Wesley said.

The new image of Jupiter was taken with Hubble's Wide Field Camera 3, which was installed by the astronauts aboard space shuttle Atlantis in May. Because it is still being calibrated, the camera's full power has yet to be seen, NASA said.

The Hubble has been in orbit since 1990 and can capture images that telescopes on Earth can't, partly because it doesn't have to gaze through the planet's murky atmosphere.

The unplanned Jupiter photo shoot will add delays to the recommissioning of Hubble, NASA said. But scientists are at a point in the telescope's reboot where they have enough flexibility to employ Hubble to look at the unexpected astronomical event, they said.

All About Hubble Space Telescope