(CNN) -- The crew of the Space Shuttle Endeavour returned to earth on Friday morning after spending 16 days in space. 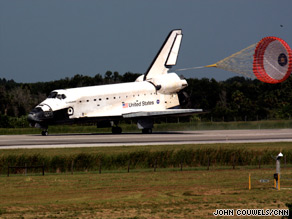 The space shuttle Endeavour lands at 10:48 a.m. at the Kennedy Space Center in Florida.

Endeavour landed at 10:48 a.m. at the Kennedy Space Center in Florida.

The seven-member crew lifted off on July 15 after five previous launch attempts due to weather and technical issues on a mission to the international space station.

Once at the station, the crew met with the six inhabitants, bringing the number of astronauts ever assembled in orbit to a record high of 13.

The crew dropped off American astronaut Timothy L. Kopra and picked up Japanese astronaut Koichi Wakata for the return trip to Earth.

Also called the Japanese Experiment Module, Kibo is Japan's first human space facility and has been in the making for more than 20 years.

Watch what's next for NASA »

The mission's primary goal was to install a porch-like platform for the international space station, NASA said.