(CNN) -- NASA's Kepler space telescope has already made a discovery, and its science operations aren't even officially under way yet. 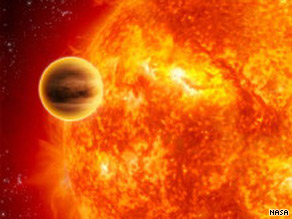 The planet used in the test is a giant gas planet about the size of Jupiter that orbits a star called HAT P-7.

NASA scientists who put the telescope through a 10-day test after its March 6 launch said this week that Kepler is working well. Its ability to detect minute changes in light has enabled scientists to determine that a planet orbiting a distant star has an atmosphere, shows only one side to its sun and is so hot it glows.

Kepler's ability to take measurements that precise at such a great distance "proves we can find Earth-size planets," William Borucki, Kepler's principal science investigator told reporters at a recent briefing.

The powerful scope is looking at thousands of stars in its vision field in the Milky Way on a 3½-year mission to find planets the size of Earth and to determine how common these planets are.

The planet used in the test, a giant gas planet about the size of Jupiter, orbits a star called HAT P-7 in just 2.2 days and is 26 times closer than Earth is to the sun, according to NASA. It is called an exoplanet because it orbits a star outside the solar system.

Kepler detected the planet's atmosphere, demonstrating the telescope's capabilities and giving astronomers what NASA says is "only a taste of things to come."

"Kepler learned something new about an old planet," she said. "The new discovery was that planet is extremely hot, very, very hot. And it's very, very hot on one side, compared to the other."

Borucki compared it to "an element in your toaster or stove."

All About Unmanned Space Exploration • NASA