Discovery set to launch next week for space station 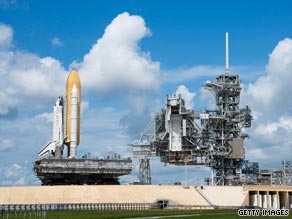 The space shuttle Discovery is brought by crawler to its pad at Cape Canaveral, Florida, on August 4.

Launch is scheduled for 1:36 a.m. ET Tuesday, NASA said. However, launches often are delayed because of inclement weather or technical concerns.

Discovery will carry a crew of seven astronauts as it ferries equipment to the space station. One of the astronauts, Nicole Stott, will remain on the space station as a flight engineer, replacing astronaut Timothy Kopra, who will return home aboard Discovery as a mission specialist, according to the NASA Web page for the mission.

Discovery will also be carrying the Combined Operational Load Bearing External Resistance Treadmill (COLBERT) to the space station. The treadmill is named for fake newsman Stephen Colbert of Comedy Central's "The Colbert Report."

Earlier this year, NASA conducted an online poll to name the space station's newest compartment, asking voters to choose one of four given options or offer their own suggestion. Colbert urged his viewers to suggest "Colbert," which won.

But Colbert and the space agency compromised to give the moniker to the treadmill instead. The new module was given the name Tranquility.

"I'm so proud my treadmill will be going into space to help trim down those famously fat astronauts. Lay off the Tang, Chubby!" Colbert said in a statement.

The mission will be Discovery's 37th to space, and the 30th shuttle mission dedicated to assembly and maintenance of the space station, NASA says.

All About International Space Station • NASA