(CNN) -- For astronaut Jose Hernandez, his first space flight, scheduled to be aboard the space shuttle Discovery, marks a remarkable journey from the farm fields of California to the skies. 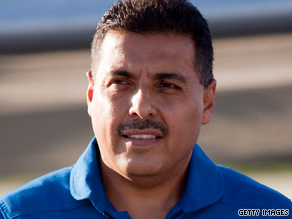 Astronaut Jose Hernandez is an American-born son of immigrants from Michoacan, Mexico.

Hernandez, an American-born son of immigrants from Michoacan, Mexico, is getting plenty of attention at home and abroad for his journey from working the fields to operating some of the most advanced mechanics on the space shuttle.

Mexican President Felipe Calderon called the 47-year-old astronaut over the weekend to congratulate him. A transcript of the entire conversation was promptly posted online by the Mexican government. Hernandez is also reaching out to fans through Twitter, where he posts updates under the name "@Astro--Jose."

"I come from a very humble family and what I would call a typical migrant farm working family," Hernandez said in a NASA interview.

As a child, Hernandez's family split their time between Mexico and California, where they worked as migrant farm workers.

During the school year his parents emphasized his education, but on the weekends Hernandez would help the family, he said in the interview, posted on the NASA Web site.

Growing up in Stockton, California, it was Hernandez's job as the youngest child to hold up the rabbit ear antennas on the family's television set in order to get the best reception while everyone watched the Apollo missions.

"Now I kid around with my family saying that, you know, it was through osmosis that I became an astronaut because I was closest to the whole situation," Hernandez told NASA.

The real catalyst for his dream to become an astronaut, however, came when Franklin Chang-Diaz, became the first Latin American astronaut in 1981.

"There was a lot of parallels and that's when I challenged myself. I said, "Hey, if Franklin can do it, why can't I do it?" Hernandez said in the interview.

Hernandez earned undergraduate and graduate degrees in electrical engineering, and before joining NASA worked on a number of high-tech projects, including an X-ray laser to be deployed in space, a digital mammography system and the disposal of excess nuclear material in Russia, his official biography states.

According to NASA, there are nine Hispanics currently in the astronaut program, and 13 total in the program's history. Astronaut Danny Olivas, also of Mexican descent, will also fly on Discovery's upcoming 13-day mission.

The scheduled launch of Discovery on Tuesday was scrubbed twice, once because of weather and then hours later because of of mechanical issues involving a drain valve. NASA did not announce a new launch schedule.