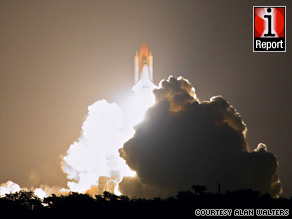 The crew of seven astronauts includes a Mexican-American and one from Sweden. Another of those seven, Nicole Stott, will remain on the station as a flight engineer, while astronaut Timothy Kopra is to return home aboard the shuttle.

NASA astronaut Cady Coleman said the treadmill is an essential addition to the space station.

"We have the treadmill now to keep them healthy, which is really part of being able to come home in one piece. So it is an essential part," Coleman said. iReport.com: Discovery lights night sky

Discovery's liftoff, originally set for Tuesday, had been postponed three times -- first for bad weather, and twice more while mission managers checked out indications of a faulty valve.