(CNN) -- What would you see if you could fly over Mars in a plane and look out the window? 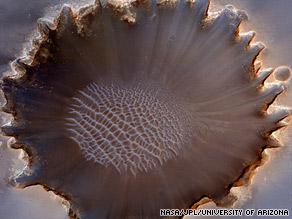 Victoria Crater as seen by the Mars Reconnaissance Orbiter. The crater is about half a mile in diameter.

It must be something like the thousands of curious, intriguing and spectacular images taken by the High Resolution Imaging Science Experiment (HiRISE) camera mounted on NASA's Mars Reconnaissance Orbiter.

The University of Arizona, Tucson, which operates HiRISE, has just released a new batch of these photos taken in the last several months.

You can check out the full set here.

They reveal an alien landscape of craters, valleys, ridges, channels, weird surface patterns and other features in incredible detail.

Take the stunning image on the left, which shows the muffin-cup-like Victoria Crater, a site once explored by the Mars rover Opportunity.

The camera isn't looking straight down, but is pointed 22 degrees east so we get a better view of the crater's slopes, "comparable to a view from an airplane window," the university says.

Looking at some of the photos, you feel like you're flying over the Grand Canyon or the Sahara. Others are distinctly extraterrestrial in nature. In all cases, the images reveal lots of details about the surface of our neighbor in the solar system.

"Each full image from HiRISE covers a strip of Martian ground 6 kilometers (3.7 miles) wide, about two to four times that long, showing details as small as 1 meter, or yard, across," according to NASA's Web site.

It might be the closest thing to visiting Mars without leaving your chair.