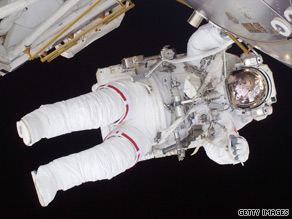 The depleted tank assembly is being stowed in the shuttle's cargo bay for return to Earth.

The tank is part of a cooling system, which cycles 600 pounds of ammonia through the space station to "get rid of excess heat generated by the station's systems," NASA said.

On Friday, debris from a European Ariane series rocket launched in 2006 is expected to move within 1.8 miles (3 kilometers) of the space station. NASA decided on Thursday the debris would not pose a danger to the space station and shuttle.

The mission's third and final spacewalk is set for Saturday. Separately, the crew has unloaded about half of the 8 tons of supplies ferried to the station aboard Discovery, according to NASA. The astronauts have until Monday to complete the job.

Discovery lifted off a week ago and linked with the space station two days later. Weather and technical problems had delayed the shuttle launch three times.

All About International Space Station • NASA