(CNN) -- Forget Hollywood special effects or Impressionist paintings -- some of the most stunning images are created by the mysterious and often violent forces in the universe. 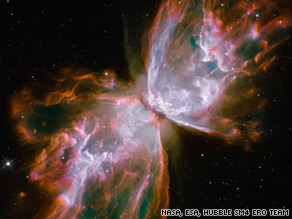 The Butterfly Nebula is about 3,800 light-years away in the constellation Scorpius.

Witness the handful of new snapshots taken by the Hubble Space Telescope, which was equipped with a new imaging camera during a space shuttle servicing mission in May.

It's back in business and there's lots to ooh and aah over.

"Let there be no doubt, this is truly Hubble's new beginning," said Ed Weiler, NASA's associate administrator, during a news conference Wednesday.

Take the image on the left of planetary nebula NGC 6302, also known as the Bug Nebula or the Butterfly Nebula.

Its "wings" are made of gas heated to more than 36,000 degrees Fahrenheit and there is a dying star at its center.

"The gas is tearing across space at more than 600,000 miles an hour -- fast enough to travel from Earth to the moon in 24 minutes," NASA's Web site says.

The "butterfly" is more than 2 light-years across.

NASA took advantage of the special filters on Hubble's camera to isolate the light of different elements, said Bob O'Connell, chair of the science oversight committee for Wide Field Camera 3.

The red in the image is nitrogen gas, for example, and the blue is oxygen. See some of the previous amazing images taken by Hubble

Colors are also prominent in the image of globular star cluster Omega Centauri, which contains almost 10 million stars, but the color contrast here is real. The gold dots are stars like our sun, but the blue ones are extremely hot, while the red ones are cool, O'Connell said.

"Just by looking at the color of the stars in the picture, you can sort them by temperature and evolutionary state because the temperature differences here are caused by differences in the internal structure of these stars and in the kinds of fuels they're burning deep inside of them," O'Connell said.

Another image shows Stephan's Quintet, a group of five galaxies -- some of which are 290 million light-years away in the constellation Pegasus. Over time, those galaxies will eventually merge into a single big galaxy, O'Connell said.

Finally, images of a stellar nursery as seen in visible and infrared light reveal the secrets inside the Carina Nebula, located 7,500 light-years away.

"This is a cloud of dense material which is being bombarded by intense radiation from surrounding stars," O'Connell said.

"But dissolve to infrared and the cloud disappears. ... An energetic infant star is being formed inside this cloud."

Hubble is expected to continue its mission for at least five more years.

All About Hubble Space Telescope • NASA