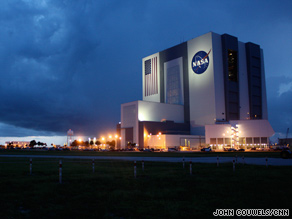 The landing was scrubbed citing bad weather near Kennedy Space Center in Florida on Thursday.

The next landing opportunity for Discovery will come shortly before 6 p.m. ET on Friday, officials said. That landing would also take place in Florida.

The shuttle initially was set to land at 7:05 p.m. ET Thursday.

After the crew woke up to the Beatles' "Good Day Sunshine," Discovery performed an evasive maneuver at 12:02 p.m. ET to avoid an unidentified piece of debris.

Although NASA officials didn't know the precise nature of the object, the debris is believed to be from the mission's third spacewalk.

The seven astronauts are wrapping up a 13-day mission to the international space station, where the crew made repairs and delivered supplies.