(CNN) -- The name is already taken, but "The Hitchhiker's Guide to the Galaxy" might be a fitting title for a new interactive view of the Milky Way unveiled this week by the European Southern Observatory. 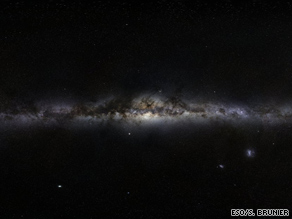 Hundreds of photos taken with a regular digital camera, along with computer crunching, formed this panorama.

The 800-million-pixel panorama shows an edge-on view of the plane of our galaxy, complete with points of interests such as the 12-billion-year-old, star-packed globular cluster Omega Centauri and the beautiful, reddish Rosette Nebula.

Want to stay closer to home?

The panorama also points out familiar landmarks such as Jupiter, noting it's the third-brightest object in our night sky after the moon and Venus.

For a bit of a head-rush, you can choose to zoom in and click on "Tour Destinations," which will take you on a trip from one end of the galaxy to another, stopping at your selected point of interest.

Users can explore the image in magnificent detail, uncovering millions of individual stars forming a dustlike haze, or superimpose a map of the different constellations in the sky.

The beautiful panorama is the first to be released as part of the GigaGalaxy Zoom project, which seeks to "link the sky we can all see with the deep, 'hidden' cosmos that astronomers study on a daily basis," according to ESO.

The image is composed of almost 1,200 photos, which were taken by French astrophotographer Serge Brunier with a regular digital camera from ESO observatories at La Silla and Paranal in Chile and from one of the Canary Islands.

"I wanted to show a sky that everyone can relate to, with its constellations, its thousands of stars, with names familiar since childhood," Brunier said.

The images were then crunched into the single panorama using special software, an effort that took about 340 computing hours to finish, according to the ESO.

You can chart your own trip across the Milky Way at GigaGalaxyZoom.org.

The next GigaGalaxy Zoom image will be released Monday.