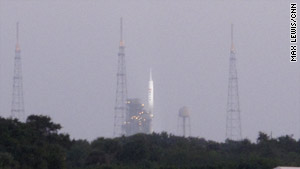 NASA had until noon Tuesday to launch the 327-foot rocket -- currently the world's largest -- from the Kennedy Space Center in Florida.

The Constellation Program, of which Ares I-X is a part, has been developing new vehicles that would replace space shuttles, which will be phased out in 2010.

Starting at 8 a.m. ET Tuesday, the original launch target, NASA set subsequent launch times but got no cooperation from the weather. The launch was finally scrubbed shortly before 11:30 a.m.

Part of the test rocket mission is for scientists to test three massive main parachutes -- measuring 150 feet in diameter and weighing one ton each -- the largest rocket parachutes ever manufactured.

The two parts of the rocket are to separate at about 130,000 feet. The top of the rocket, known as the upper stage, includes a mock Orion crew capsule and a launch abort system. The upper stage will continue its ascent until gravity forces its return to Earth, where it will fall into the Atlantic Ocean.