Can scientists make a space elevator? 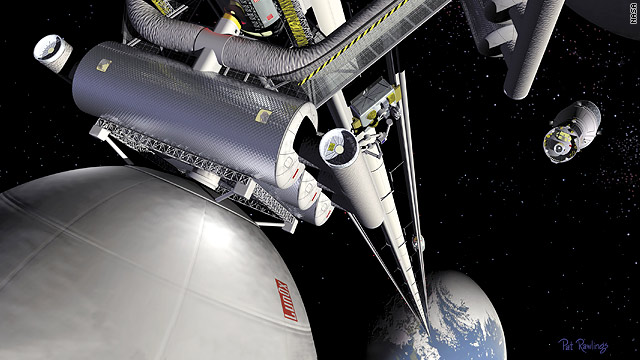 This concept image from NASA shows what a space elevator and transfer station could look like.
STORY HIGHLIGHTS
RELATED TOPICS

"The question Artsutanov asked himself had the childlike brilliance of true genius. A merely clever man could never have thought of it -- or would have dismissed it instantly as absurd. If the laws of celestial mechanics make it possible for an object to stay fixed in the sky, might it not be possible to lower a cable down to the surface, and so to establish an elevator system linking earth to space?" -- Arthur C. Clarke, 1979, "The Fountains of Paradise"

(CNN) -- It sounds like science fiction. And it was.

Now, 30 years after "2001" author Arthur C. Clarke wrote about an elevator that rises into outer space, serious research is happening all over the world in an effort to make the far-fetched-sounding idea a reality.

The benefits of a fully realized elevator would make carrying people and goods into space cheaper, easier and safer than with rocket launches, proponents say, opening up a host of possibilities.

Scientists envision all of the above -- possibly within our lifetimes.

This week in the Mojave Desert, three teams of engineers are competing for $2 million offered up by NASA for anyone who can build a prototype of an elevator able to crawl up a kilometer-high tether while hauling a heavy payload.

"We haven't had any winners yet, but we truly do expect to have at least one winner, probably more [this year]," said Ted Semon, spokesman for The Spaceward Foundation, which has run the competition for the past several years.

Most models for an elevator into space involve attaching a cable from a satellite, space station or other counterweight to a base on Earth's surface.

Scientists say inertia would keep the cable tight enough to allow an elevator to climb it.

The inspiration for researchers to pursue a space elevator started, as many scientific advances have, in the fantastical world of science fiction.

In Clarke's 1979 novel "The Fountains of Paradise," he writes about a scientist battling technological, political and ethical difficulties involved in creating a space elevator.

In the years that followed, Clarke, who died last year, remained an outspoken advocate for researching and funding the elevator.

Others are now carrying the torch.

"Space elevator research is important because it is a way to build a bridge to space instead of ferrying everything by rocket," said Smitherman, who has conducted research and published findings on the effort.

Microsoft is among the sponsors an annual space elevator conference, and teams in Japan and Russia are among those working to turn the theory into reality -- even if they all admit they have a long way to go.

Even the most avid proponents of the research admit there are big hurdles that need to be overcome.

The first, scientists say, is that there's currently not a viable material strong enough to make the cables that will support heavy loads of passengers or cargo into orbit. According to NASA research, the space elevator cable would need to be about 22,000 miles long. That's how far away a satellite must be to maintain orbit above a fixed spot on the Earth's equator.

"Right now, if you use the strongest material in the world, the weight of the tether would be so much that it would actually snap," said Semon, a retired software engineer. He said the super-light material would probably need to be about 25 times stronger than what's now commercially available.

In a separate competition, his group offers a prize to any team that can build a tether that's at least twice as strong as what's currently on the market.

Another issue, scientists say, is how to keep the cable, or the elevator itself, from getting clobbered by meteorites or space junk floating around in space. Some suggest a massive cleanup of Earth's near orbit would be required.

And then there's the cost. Estimates are as high as $20 billion for a working system that would stretch into orbit.

Many think it would be private enterprise, not a government, that would spring for the earliest versions of the elevator.

Professor Brendan Quine and his team at York University in Toronto, Canada, think they have the answers to at least some of those problems.

They've built a three-story high prototype of an elevator tower that would rise roughly 13 miles (20 kilometers) -- high enough to escape most of the earth's atmosphere.

"At 20 kilometers, you still have gravity; you're not in orbit," Quine said. "But for a tourist, you can see basically the same things an astronaut sees -- the blackness of space, the horizon of the Earth."

In the stratosphere, the tower also could potentially be used to launch rockets, he said. The most expensive and energy-sucking part of any space launch now is blasting from the ground out of the atmosphere.

Constructed from Kevlar, the free-standing structure would use pneumatically inflated sections pressurized with a lightweight gas, such as hydrogen or helium, to actively stabilize itself and allow for flexibility. A series of platforms or pods, supported by the elevator, would be used to launch payloads into Earth's orbit.

Quine acknowledged that the prototype is just a first step toward realizing the elevator and that several more prototypes are needed to fine-tune details.

He estimated that the cost of the basic tower would be about $2 billion -- the equivalent of a massive skyscraper in places like New York -- and that the technology to build it could be ready in less than 10 years.

He said a more advanced -- and expensive -- elevator tower could be built to go higher into the stratosphere.

But for the purposes of actually ferrying everyday people into space, 20 kilometers makes the most sense, Quine said.

"The tower might be economically viable if you're able to transport 1,000 people a day to the to of it for about $1,000 a ticket," he said. "At the top, you'd probably want amenities -- hotels, restaurants. It could be a very pleasant experience, in contrast to zero gravity, which makes many people sick."

For now, advocates of making the elevator a reality say they'll keep at it. They'll continue reminding themselves that they wouldn't be the first to turn what started as an outlandish idea into good science.

"Every revolutionary idea seems to evoke three stages of reaction," Clarke once said. "They may be summed up by the phrases: One, it's completely impossible. Two, it's possible, but it's not worth doing. Three, I said it was a good idea all along."