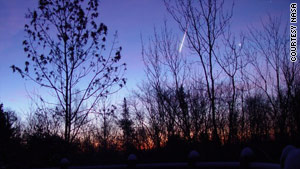 NASA says that this year's Leonid meteor shower will be light over the United States and heavier over Asia.
STORY HIGHLIGHTS

"We're predicting 20 to 30 meteors per hour over the Americas and as many as 200 to 300 per hour over Asia," said Bill Cooke, of NASA's meteoroid environment office. "Our forecast is in good accord with ... work by other astronomers."

The Leonid shower is made of bits of debris from the Tempel-Tuttle comet, which streaks through Earth's inner solar system every 33 years.

It leaves a stream of debris in its wake. Forecasters, however, say it's hard to know exactly how many of the meteors will be visible.

"We can predict when Earth will cross a debris stream with pretty good accuracy," Cooke said. "The intensity of the display is less certain, though, because we don't know how much debris is in each stream."

The first stream will cross over Earth about 4 a.m. ET. That stream should produce about two or three dozen meteors per hour over North America, NASA said.

Experts say people who want to watch the shower, which is visible with the naked eye, should get as far away from city lights as possible. The darker the sky, the brighter the meteors will appear.

Leonids will appear to be shooting almost directly out of the planet Mars.
--Bill Cooke, of NASA's meteoroid environment office
RELATED TOPICS

High-altitude sites are best for viewing, reducing glare from the moon, and there's no particular direction one should look for the best shot at seeing one, they say.

The next Tuesday streams will peak over Indonesia and China shortly before dawn there. The pair of streams there were actually laid down by Tempel-Tuttle in A.D. 1466 and 1533, and the two of them crossing at the same time is the reason for the 300 or so visible meteors expected.

"Even if the rates are only half that number, it would still be one of the best showers of the year," Cooke said. Share photos, video from the meteor shower

Overall, and especially in the United States, this year's Leonids are mild.

But one added plus this year, Cooke said, is that, coincidentally, Mars will be passing nearby at the time of the showers.

"Leonids will appear to be shooting almost directly out of the planet Mars," he said.