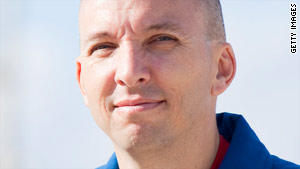 Bresnik is part of the crew on the space shuttle Atlantis, currently docked with the International Space Station.

Bresnik called Mission Control at 6:14 a.m. ET Sunday to announce the birth of Abigail Mae Bresnik about seven hours earlier, according to the NASA Web site on the shuttle mission. The baby weighed 6 pounds, 13 ounces and was 20 inches long.

"Just wanted to take this opportunity to report some good news," Bresnik said, according to a NASA transcript. "At 11:04 last night, Abigail Mae Bresnik joined the NASA family, and mama and baby are doing very well."

Bresnik had private communication channels arranged in advance for the birth, the agency said.

Atlantis lifted off Monday on a mission to deliver parts to the international space station.

"I think like most parents, I would prefer to be there at the birth for sure, but we don't pick this timing and so it's ... a little bit disappointing not to see her in person right when she enters the world," Bresnik said in a preflight interview, a transcript of which is posted on the NASA Web site.

"But fortunately, through the wonders of modern technical advancements and our amazing communication systems on the ISS and space shuttle, hopefully I'll be able to hear and see the pictures and be able to talk with her maybe on the IP phone and see some video shortly thereafter and be home only a few days afterwards."

NASA did not disclose the location of Bresnik's wife and daughter, citing privacy concerns.

The couple already has a 3-year-old son, whom they adopted from Ukraine a year ago, Bresnik said.

Bresnik's wife echoed his mixed feelings in the preflight interview.

"I'm a little disappointed that he won't be able to be there, but understanding that we don't choose the timing, and [I'm] excited for him that he's doing what he's doing," said Rebecca Bresnik, a NASA attorney.

She said labor was being induced two weeks early for medical reasons, "so we're able to play with the date a little bit."

The shuttle crew was awakened Sunday morning by the song "Butterfly Kisses," which was selected for Bresnik, NASA said. The song, by Bob Carlisle, is about a man and his daughter.

It was the second time a baby has been born to a U.S. astronaut who was on a space mission. Mike Fincke's daughter was born in June 2004 while he was aboard the international space station, NASA said.

Bresnik and astronaut Robert Satcher Jr. were gearing up Sunday for a third and final spacewalk, planned for Monday. The two will prepare spacesuits and tools Sunday, along with reviewing the updated procedures, NASA said.

The spacewalk was replanned overnight after Bresnik and Mike Foreman were able to get ahead during a spacewalk Saturday, according to NASA. The shuttle is scheduled to land on Friday.