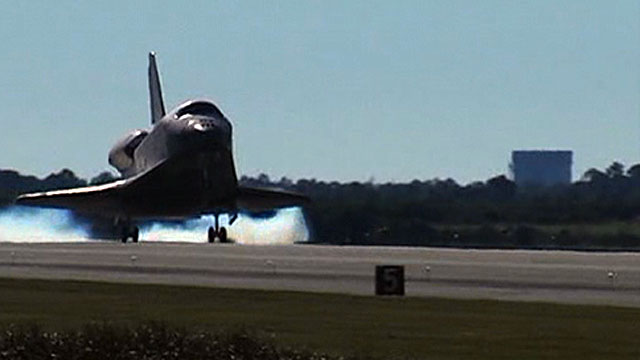 The seven-person crew returned after an 11-day mission to deliver key spare parts to prolong the life of the international space station.

"Couldn't have picked a clearer day," Cndr. Charles Hobaugh said as the shuttle approached the runway.

Mission Control told Hobaugh that the landing was a "picture-perfect end" to the mission. "Everybody, welcome back to Earth, especially you, Nicole," Mission Control said.

Stott had spent 87 days on the international space station, according to NASA.

About an hour after the shuttle landed, the crew transport vehicle moved alongside the orbiter access hatch on Atlantis' port side, NASA said on its Web site. With the crew hatch opened, the astronauts left the orbiter to enter the vehicle.

It contains beds and comfortable seats so the astronauts can receive a brief medical checkup before they step onto the tarmac, NASA said.

The crew's mission included three space walks and installation of two platforms to the station's backbone. The platforms will hold spare parts that will sustain station operations after the shuttles are discontinued.

NASA said the parts the crew delivered will add years to the station's life after the space shuttle fleet is retired next year.

Some of the parts are for systems that keep the station from overheating or tumbling through space, NASA said.

During the mission, the crew celebrated Thanksgiving while they prepared for landing. They dined on smoked turkey, green beans, mushrooms, cornbread dressing and candied yams, according to NASA.

Russia will take over supplying the international space station.

On this mission, Atlantis also marked a 6 pound, 13 ounce development.

Astronaut Randy Bresnik welcomed a daughter from space, the second time a baby has been born to a U.S. astronaut on a mission.

Mike Fincke's daughter was born in June 2004 while he was aboard the international space station, NASA said.