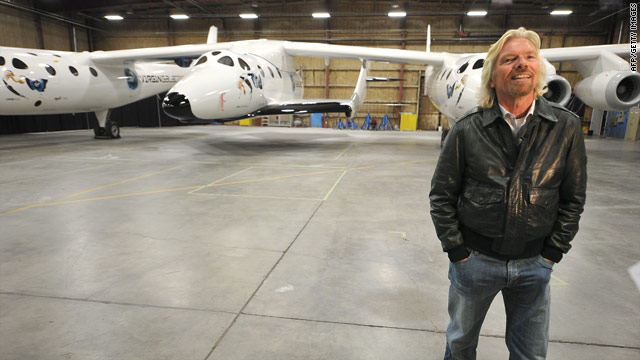 The 300 people who have given Branson's Virgin Galactic $20,000 deposits toward the $200,000 space-ride tickets were invited see SpaceShipTwo in its Mojave, California, hangar. CNN was given an early peek.

The first flight in 2011 -- after 18 months of testing -- will launch from a spaceport under construction in New Mexico, Branson said.

Another aircraft will carry the 60-foot-long SpaceShipTwo to 60,000 feet above the Earth, where "they will drop away and they will then go to 2,000 miles per hour in 10 seconds, where they get propelled into space," Branson said.

Its hybrid rocket motor -- still under development -- will reach a suborbital altitude high enough to reach the edges of space and weightlessness, according to Branson.

"Once in space, [passengers] will unbuckle their seats," he said. "There are enormous windows, which no spacecraft has had before, for them to look back at the Earth. They can float around and become astronauts."

After just a few minutes of space tourism, SpaceShipTwo will glide back to Earth, landing where it began the trip in New Mexico, he said.

About 80,000 people have placed their names on the waiting list for seats on SpaceShipTwo and its successors.

"What we want to be able to do is bring space travel down to a price range where hundreds of thousands of people would be able to experience space, and they never dreamed that [they] could," Branson said.

He said he hopes the technology will lead to a new form of Earth travel, jetting people across oceans and continents faster through suborbital routes.

"We would love at some stage, obviously subject to government approval, to take the engineers and start looking at shrinking the world," Branson said.

The spacecraft was based on the technology and carbon-composite construction developed for SpaceShipOne, which won the Ansari X Prize in 2004 for the first privately funded human flight to the edge of space.

The reusable spacecraft is a joint effort by aviation designer Burt Rutan's Scaled Composites and Virgin Galactic, a space tourism venture that is a subsidiary of Branson's Virgin Group.