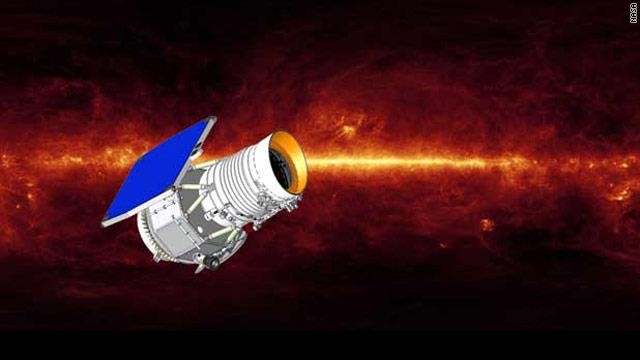 An artist's illustration of the WISE orbiting spacecraft, which will snap millions of pictures of asteroids, comets and galaxies.
STORY HIGHLIGHTS

(CNN) -- NASA launched a new telescope into space on Monday to scan the cosmos for undiscovered objects, including asteroids and comets that might threaten Earth.

The Wide-field Infrared Survey Explorer, or WISE, spacecraft will employ an infrared camera to detect light- and heat-emitting objects that other orbiting telescopes, such as the Hubble, might miss.

WISE launched Monday at 9:09 a.m. ET aboard a Delta II rocket from Vandenberg Air Force Base in California. The launch was postponed from Friday because of a problem with the motion of a booster steering engine.

The unmanned WISE will spend the next nine months in orbit, 326 miles above the Earth, mapping the universe in infrared light. Its lens eventually will cover the whole sky 1½ times, snapping a picture every 11 seconds.

"The last time we mapped the whole sky at these particular infrared wavelengths was 26 years ago," said Edward "Ned" Wright of UCLA, the principal investigator of the mission. He was referring to WISE's predecessor, the Infrared Astronomical Satellite, which launched in 1983 and discovered six comets.

"Infrared technology has come a long way since then," Wright said. "The old all-sky infrared pictures were like impressionist paintings -- now, we'll have images that look like actual photographs."

Watch video of the launch

The solar-powered WISE will not be the first infrared telescope in space. Two others -- NASA's Spitzer Space Telescope and the European Space Agency's Herschel Space Observatory -- also catalog images of the universe, although both focus on specific celestial objects instead of surveying the entire sky.

Mission leaders expect WISE to find hundreds of asteroids and comets with orbits that come close to crossing Earth's path. By measuring the objects' infrared light, the telescope also should help determine their size and composition -- data that may help astronomers learn how often Earth can expect to be struck by a hurtling asteroid.

"We can help protect our Earth by learning more about the diversity of potentially hazardous asteroids and comets," said Amy Mainzer, deputy project scientist for the $320 million mission at NASA's Jet Propulsion Laboratory in Pasadena, California.

WISE also will be looking for dim stars called brown dwarfs and millions of far-away galaxies that are shrouded in dust and often can't be seen in visible light.

Watch a video about the mission

Data taken by WISE will be downloaded by radio transmission four times per day to computers on Earth, which will combine the many overlapping images into an atlas covering the entire celestial sphere -- complete with a list of all the detected objects.

The rocket is expected to cross the California coastline shortly after liftoff and head south, out over the Pacific Ocean. About five minutes later, the "fairing" covering the telescope was expected to split open like a clamshell and fall away.