(CNN) -- On Malmo's waterfront, once the heart of the city's industrial base, an eye-popping 57-story apartment tower rises spectacularly, dominating the skyline. 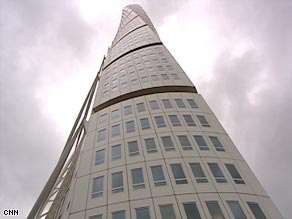 The Turning Torso is a symbol of Malmo's modern regeneration.

The building, the Santiago Calatrava-designed Turning Torso, reflects the reinvention of the city from an industrial center on Sweden's Southern coast to a leader in modern architecture and environmental design.

Heavy industry once characterized Malmo, Sweden's third largest city. At one time, it boasted one of the largest shipyards in the world. But Malmo fell on hard times in the 1980s, when a recession devastated the city's industrial base.

Since then, Malmo has been on a mission to regenerate its urban landscape. The city's willingness to embrace change and look ahead to the future has made it a vibrant hub of the Oresund -- the area of Scandinavia that encompasses southern Sweden and eastern Denmark.

Driving the revitalization in the early part of this decade was the opening of the Oresund Bridge, an engineering feat that connects Malmo to Copenhagen. It takes a little more than half an hour to travel between the two cities by train, and traffic across the bridge has doubled over the past five years.

The bridge has spurred greater economic integration between the two cities and has become a symbol of the vibrancy of the transnational Oresund region. (Malmo belonged to Denmark until the 17th century, when it became part of Sweden. Today, the region still identifies with both Danish and Swedish cultures.)

Amid the regeneration drive, Malmo has positioned itself as a pioneer in eco-friendly living. Even by environmentally-conscious Sweden's standards, the drive to go green has been impressive. Lillgrund, the third largest wind park in the world, is located off Malmo. The city has also supported the development of environmentally friendly urban neighborhoods and was appointed Sweden's first "Fairtrade City" in 2006.

Although Malmo has rushed in the modern age, the city still manages to maintain a traditional feel. In the city's Old Town, you can meander down cobblestone streets and admire architecture from centuries long ago. Large swathes of greenery stretch across Malmo, which is also known as the City of Parks, beckoning residents as well as neighboring Danes.

Locals describe Malmo as a relaxed and open city, the sort of place where you can escape from it all but still find something new to rouse your interest. The city's cultural scene is rooted in a shared passion for music. Every summer, the city pulsates as music-loving throngs descend upon the city for the Malmo Festival -- an eight-day music extravaganza.

But the city's character is best reflected by its people. Immigrants flocked to Malmo after World War II, and the wave has not really waned since. Take a stroll through the Mollevangen neighborhood and you'll find Iranian supermarkets next to falafel stands and Thai restaurants.

Malmo takes pride in its ethnic diversity. The city's tourism office points out that more than 100 languages are spoken on its streets. But like much of the rest of Sweden, the rise in immigration has created social tension in Malmo. Segregation remains a problem, with many immigrant communities marginalized on the periphery of the city.

Nonetheless, there is hope that the redevelopment of the city's open spaces will help foster more cultural integration. There's no better sign of this happening than in the Western Harbor district. On a given day, you'll find the urban rich and recent immigrants on the long stretch of waterfront, drawn together by the seascape.