The best times to visit Malmo

(CNN) -- Malmo hosts fantastic events throughout the year that make the most of the outdoors and reflect the city's enthusiasm for music. Here are some of the best. 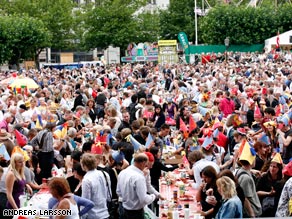 Malmo Festival kicks off every year with a massive crayfish party.

BUFF Film Festival (March)
There are about a dozen film festivals held annually in Sweden, the birthplace of master filmmaker Ingmar Bergman. But BUFF is the only one specializing in movies for children and young people. Held in Malmo's Old Town, the festival screens roughly 100 films from around the world. Various seminars and discussions are also held during the festival.

Malmo Festival (August)
The city pulsates with life during this eight-day outdoor culture extravaganza that's been going strong for nearly a quarter of a century. Music is the big draw, attracting some 1.5 million to Malmo every August. Hundreds of live acts fill the city with sounds of classical music, heavy metal and everything in between. If you aren't busy dancing the night away, you'll want to take in the film screenings, comedy shows and theater performances staged during the festival. The best part about the festival? It's absolutely free. The revelry kicks off with a massive crayfish party in the city's main square. Bring your own crayfish and a mood to party.

Oktoberfest (September-October)
Beer flows endlessly and the beat goes on at nightclub Slagthuset during Oktoberfest. The club, located behind Central Station, is the biggest in Malmo and all of Scandinavia for that matter. The celebration is smaller than what you'll find in Munich but the crowd is no less energetic. With three dance floors, get ready to get your groove on.

Shop Window Sunday (November-December)
'Tis the season for holiday cheer. Malmo puts on a lively round of performances during the holiday season. The countdown to Christmas starts with Skyltsondag (Show Window Sunday) -- the day when the city's shopkeepers vie for the most attractive Christmas window display. Take in a concert or join in the traditional Swedish celebration of light in Stortorget, the city's main square. To really get in the spirit, grab some skates and hit the free rinks in Stortorget and Folkets Park.