The Cardigans' singer on life after 'Lovefool'

MALMO, Sweden (CNN) -- The breathy vocals of Nina Persson helped launch The Cardigans onto the music scene in the 1990s. The band developed its dreamy pop sound in the Southern Swedish town of Malmo. 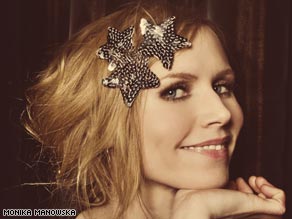 They were catapulted to international success in 1997, when the single "Lovefool" appeared on the soundtrack for "Romeo and Juliet," starring Leonardo DiCaprio and Claire Danes. The song's chorus ("Love me, love me, say that you love me") became a pop anthem.

In addition to fronting The Cardigans, Persson, 34, has worked on solo projects under the name A Camp. Now, after a near decade long hiatus, her second A Camp album, "Colonia," is due out later this month.

Persson, who splits her time between New York and Malmo, talks to CNN's "My City, My Life" about music, inspiration and life after "Lovefool."

CNN: How did The Cardigans start?

Nina Persson: We formed the band in this town where we are all originally from -- Jonkoping -- and that was in 1992. Magnus and Peter were the two guys who actually met and wanted to form the band. And then they recruited people and I was one of the first to be recruited, along with a friend of mine who played guitar in the first version of The Cardigans.

I had not sung before that really. I was sort of hired because they knew they wanted a girl singing. And I was like 'I'm a girl' and I guess we got along well and I was willing to learn to sing. So that's how it started really.

CNN: How big was music in your life before you joined the band?

Nina Persson: I've loved music my whole life. But I never really listened to a record and thought that was something that I wanted to do. I was interested in becoming a painter, an architect, a designer. Those are the things I was interested in. But music, I never took instrument classes -- it was a random thing to start doing.

CNN: Sometime a career finds you?

Nina Persson: Yeah and I was a person who was really helped by it. I was looking for something but I didn't know what it was and it proved to fulfill what I needed at the time.

CNN: How is A Camp different from The Cardigans?

Nina Persson: It's hard to say what makes it different because I'm still doing the same thing -- I'm still writing songs and singing them -- but it feels like it's a bigger freedom because I am in charge in A Camp. I like both. Both serve good purposes. I like to be in the collective, being part of the machinery, but I also really enjoy being dictator.

CNN: How do you define yourself as a musician now?

Nina Persson: Well I'm not. I'm not one of these people who live and breathe music. In the beginning I was a reluctant musician -- I still haven't bothered to learn an instrument. I'm still only a singer and that's how I write my songs. I'm always superstitious that if I do learn an instrument I would pop the bubble a bit.

CNN: Is there anything else you would have liked to have done if you hadn't done singing?

Nina Persson: At the time when I was found, picked up by the band, I was into art. I was really good at drawing, really creative. I made stuff, I built stuff, I sewed stuff. I thought I would end up in that world somewhere. Photography was a big thing for me. In retrospect, I'm sure that could have been a good career for me.

But recently I've started to wish that I could start over and dedicate my life to medicine. I would have loved to go to med school. I don't think I will because I don't want to spend seven or eight years in training, but I dream about working in a hospital.

CNN: What were your inspirations over the years?

Nina Persson: That's an incredibly difficult question to answer, but I think I'm a sucker for constantly going back to the subject of love and relationships. It also varies very much from project to project and month to month. I'm very emotional when it comes to the music. I want to make people cry.

CNN: Tell us the story of how the band ended up in Malmo.

See photos of Nina in Malmo »

Nina Persson: We moved here because we started to record in Tambourine Studios which was here. Most studios are in Stockholm so sort of all roads wanted to drag us to Stockholm but we did persist and came here.

CNN: When you came to Malmo, what was it like starting out in the early days?

Nina Persson: Our parents helped us move down here which was really sweet. They sort of dropped us off and waved goodbye and we moved in. We really did hang out, the five of us, quite exclusively in the beginning.

CNN: What was the area like back then? Has it changed?

Nina Persson: Well actually the area where I now live hasn't changed that much. A lot of Malmo has moved away from the blue collar past it has, but not that area. It has strangely remained the same, and I like it.

CNN: Do you think the gritty atmosphere of Malmo has helped you stay grounded?

Nina Persson: Well it's hard to say how much has to do with the people we are or how much to do with Malmo. But there certainly is something here that does not encourage big headedness.

CNN: The musical heritage of Malmo is quite rocky. How did you guys fit in?

Nina Persson: People thought we were really ridiculous when we came to this totally rock place and played pop music. So we didn't fit in at all -- we were never part of the scene here.

CNN: You were happy to be outsiders of the rocky heritage?

Nina Persson: I think we felt sort of cool about doing our own thing. We thought we knew something that the others didn't understand.

CNN: Is there something about Malmo that helps shape your music or influence you?

Nina Persson: I think Malmo did have a big influence on us. Obviously we came here for the sound, and we got the sound we wanted. We were away from the industry -- that was great for us. I really did appreciate being in a place where there is not a lot whole of press and industry. Nina takes

CNN: So you also live in New York. What brings you back to Malmo?

Nina Persson: For me, I love Malmo very much because of my friendships. In Malmo I get the intimacy and get to run into my friends in the street once in a while which is a lovely feeling and I get to have a great grocery store just around the corner.

CNN: If Malmo was a person, what kind of person would it be?

Nina Persson: It would be somebody who has been around for a while and survived a lot of hardships -- somebody you don't mess with, somebody really intelligent, stubborn, with a lot of beauty on the inside.