Mumbai: A city of celebration

(CNN) -- Mumbai is always colorful and dynamic but if you're lucky enough to be in town for one of the city's major festivals you'll witness Mumbai erupting into glorious Technicolor. 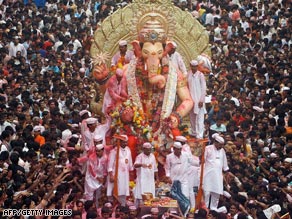 This two-day event takes place in the caves on the island of Elephanta, some 10 km from Mumbai harbor.

The caves themselves, filled with carvings, sculptures and a temple to the Hindu god Shiva, are a UNESCO World Heritage site and make the perfect backdrop for the festival, which features performances from some of India's finest dancers and musicians, as well as traditional music from local fishermen.

This Hindu festival marks the start of spring and is celebrated throughout India. The most lively and downright fun of all Hindu festivals, the occasion is marked by people running through the streets throwing water and colored powder in all directions. Holi in Mumbai is as exuberant as anywhere in the country, but be warned: if you venture out onto the streets in shiny new designer duds you may end up with a hefty dry cleaning bill.

Of Mumbai's many flamboyant festivals Ganesh Chaturthi is the biggest and best-loved. Honoring Ganesh (known in Mumbai as Ganapati), the elephant-headed Lord of wisdom, good fortune and obstacles, the 10-day festival sees thousands of huge Ganesh idols displayed in "pandals" (pavilions) around the city.

On the final day of the celebrations the idols are paraded to Chowpatty Beach, where they are immersed in the Arabian Sea, accompanied by singing, dancing and drumming.

What do you think are Mumbai's seasonal highlights? Let us know

Roughly translated as "Coconut Day," Nariyal Purnima is a festival celebrated by Mumbai's fisher folk to mark the end of the rainy season.

Oil-filled lamps are lit in the Koli villages along the Mumbai coast and coconuts and garlands of flowers are thrown into the sea as an offering to the Sea God Varuna. Finally, brightly-painted boats take to the water carrying flickering oil lamps, marking the fishermen's return to the sea after the monsoon.

Lord Krishna's birthday is celebrated throughout India, but in Mumbai the festivities are especially eye-catching. Legend has it that as a young boy Lord Krishna had a fondness for curd and butter -- so much so that he would sometimes break "handis" (clay pots) to get at the dairy treats inside.

In reference to this, during "Janamashtami" teams of men (known as "Govindas") form human pyramids to try and break the "handis" suspended some 30 feet above the ground. "Handis" filled with cash and prizes are set up all over the city and teams of "Govindas" compete to break as many as possible in the course of the day.