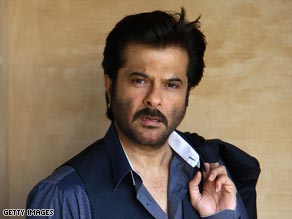 Kapoor talks to CNN's "My City, My Life" about "Slumdog", his hometown of Mumbai, his own rags to riches rise to stardom and how the recent terror attacks affected the city.

Anil Kapoor: I was born in Mumbai, in a suburb named Chembur. In my neighborhood the kids never wore shoes, we always had bare feet. I remember my parents asking me to wear shoes to go and play, but usually I would forget.

Usually kids say they want to be doctors or engineers, pilots or businessmen, but I just wanted to be an actor. My father was an assistant director for an Indian film maker and then from being an assistant he became a secretary to one of the big stars.

In my childhood I was surrounded by films, actors, film makers, directors and film talk. I would bunk school to watch movies, old English films and Hindi films -- that's how I spent my childhood. And playing cricket!

CNN: Mumbai is the home of Bollywood movies -- was that an influence?

Anil Kapoor: The influence of the film industry is tremendous over here. Every kid dreams of becoming either an actor or a cricketer. In India, we love film and everybody wants to get into films.

"It's in our bloodstream -- film making, songs, music, everything connected with cinema -- people just love it.

"It's the cheapest form of entertainment and recession or no recession, people just flock to the theaters to watch our movies."

CNN: Tell me about "Slumdog Millionaire."

Anil Kapoor: Slumdog is like my story. I also started from scratch, went from rags to riches. I started in Chembur and I slowly climbed -- God has been kind in that way.

CNN: Do you think the film is an accurate portrayal of Mumbai?

Anil Kapoor: It's a fairytale -- the story is basically a love story, but shot in a very realistic way and it is very authentic. If there is a traffic jam, he [Danny Boyle] has not created a traffic jam, he has actually shot the traffic jam. If he has gone into the slums it is not choreographed at all. The film is very natural -- whatever you see in "Slumdog" is very real -- nothing is exaggerated and nothing is downplayed.

Watch Anil Kapoor take CNN on a tour of Mumbai. »

CNN: Is the portrayal of the slums realistic?

Anil Kapoor: It is -- you'll see from the way "Slumdog Millionaire" has been shot, it's not portraying misery. You see there is a lot of hope in the kids, a lot of fun and a lot of innocence. There's not a single portion where you feel it has been sensationalized. There is nowhere in the film where you feel they are trying to show misery or poverty.

Mumbai is growing and it's a commercial city and you can see that things are changing. These are the realities and we have to face it. We are confident enough to face it, we are not ashamed.

CNN: What reaction have you had from family and friends?

Anil Kapoor: People are very proud of this film. Generally, the public is happy, the whole country is very happy. It's an Indian story with Indian content and it's great.

There are a lot of friends from Britain and USA who want to come to Mumbai, after seeing this film. I happened to talk to Tom Cruise at the Golden Globes and he is very keen to come to Mumbai and visit India.

CNN: How have the terror attacks affected the city?

Anil Kapoor: The whole country was stunned. Mumbai was coming to a standstill and we started questioning ourselves and the government, asking are we safe enough? What is happening? Is it our fault, their fault? Why cant we take action?

It really shook us completely and the tremors are still being felt. People are still angry, people are still upset, still insecure, still scared -- all these emotions are still there. You'll find everything is normal, but internally there is a certain sense of insecurity.

CNN: What do you love about the city?

Anil Kapoor: It is a city of opportunities. People come here to make it and they get absorbed by it. This city always surprises you; there is something happening constantly, there is a real buzz -- it's pulsating, like a roller coaster ride. You go somewhere outside the city and you feel it is dead compared to Mumbai. When you come to Mumbai you notice its energy, its excitement

Mumbai never sleeps. When I go to London and I want to eat something there is nothing open past 2 a.m., but here at five in the morning everything is open, everything is alive. Here everyone is so full of life, so full of happiness.

CNN: What do you do to relax in Mumbai?

Anil Kapoor: In Mumbai no one relaxes. People are always on the move -- that's what is relaxing for them. Everybody is working and enjoying themselves and achieving and dreaming. Holidays are also combined with work; the concept of holiday doesn't exist for most people over here.

CNN: What's it like being Anil Kapoor going about your business in Mumbai?

Anil Kapoor: I've never really felt like a star. I just feel like I'm one of the ordinary people in the city. I cycle around and I'm around in the street sometimes and obviously people meet me and I love meeting people from all walks of life. I just feel like one of them. I love interacting with them, I love meeting them, making friends. Wherever I go I am always available to talk, to listen. I'm a good listener and that's what I do.

CNN: Describe the people of Mumbai.

Anil Kapoor: The people are very open. It's not that the city's underbelly is hidden away and you can't see it --you see it everyday, you know what the reality is.

Everybody who comes to Mumbai adds something to this changing, dynamic city. Mumbai is ancient India with a dynamic presence and it's looking forward to a bright future.