(CNN) -- Deepa, 40, was born in Mumbai, where she is now a banking technology consultant, as well as running a company that offers "offbeat sightseeing tours" of six Indian cities, including Mumbai, Delhi and Jaipur. 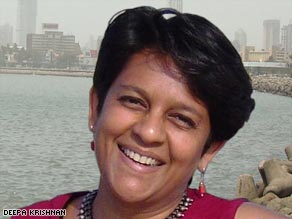 Deepa Krishnan: "When you live in Mumbai you feel like you're in the nerve center of the country."

Deepa's Mumbai tours take in the city's bazaars, backstreets and culture and her blog, Mumbai Magic, is a personal view of life in the city.

CNN: How does Mumbai compare to those other cities your company offers tour of?

Deepa: Mumbai is a very young city by Indian standards, only 500 years old, whereas a city like Delhi is really ancient. Mumbai used to be a fishing hamlet and it grew after the British arrived. So it's a young city and one that has been formed by migrants. Almost everyone in Mumbai has arrived here in the course of the last few generations, and so the city has a vibrancy and cosmopolitanism that is different from other cities.

CNN: What makes Mumbai special to you?

Deepa: The fact that I am so grounded here -- I was born here and four generations of my family live here. But also, Mumbai is on the move, it's vibrant, it's accepting of change and it's got a very active citizenry. It's the one place where you can make a mark, where you can make a difference.

What makes Mumbai special to you? Let us know

CNN: What are your favorite parts of the city?

Deepa: I think my favorite is a place called Bhuleshwar. It's the "native" bazaar area that sprang up outside the old British fort. It's got a certain colorful energy and retains its 18th Century-feel to some extent. Everything under the sun can be bought there; it's got a spice market, a jewelry market. It's a busy, bustling area where a lot of trade happens, so I love it.

CNN: Where do people go if they want to escape Mumbai's bustle?

Deepa: We head out of the city -- we run for the hills! We go to the Western Ghats, which is a mountain range that runs parallel to the coast, barely a two-hour drive from where I live.

"There's climbing and a whole bunch of very interesting mountain forts to explore; there's whitewater rafting, paragliding, cycling. Ecologically, it's a very bio-diverse area so it attracts photography enthusiasts and bird watchers. We're very lucky that we're so close to it.

We also have a lot of beaches just outside the city and they are popular as well. Within the city there are little enclaves of peace -- even in Bhuleshwar market there are temple complexes where there's a surprising silence compared to the bustle of the streets.

We also have our seaside promenades where we love to hang out. The young, who have no other place to go, find romance on Marine Drive and Bandra Bandstand. It's Mumbai's version of Lovers Lane -- except the lane is wide open!

Deepa: We party quite hard, so Saturday and Sunday evenings are days when you go out with friends and family. There are a huge number of restaurants with all sorts of cuisines on offer. There are some great clubs -- my favorite right now is a place called The Blue Frog -- and there's an active cultural scene.

Alongside all the partying we're all in a mad race to lose weight and look good. Bollywood is helping men wake up to the fact that there's nothing wrong with a well-toned physique. In all the suburbs of Mumbai there's a mushrooming of places where young guys are pumping iron and trying to be 'he-men.'

CNN: Do you think the city's changed since the terrorist attacks last November?

Deepa: Yes, I think there's a hardening of stances and an unwillingness to accept platitudes. I also think there is increased uneasiness between communities.

CNN: Has tourism been affected by the attacks?

Deepa: My own business went bust for two weeks. For two weeks I had nothing but cancellations in Mumbai and I was only saved by the fact that I was doing business in other cities. But then business picked up again. My first clients after the attacks were a Jewish American couple and I was heartened by the faith and support they showed for Mumbai.

Mumbai also gets big tour groups that arrive by bus and I think that kind of group tour has lessened, but my business gets more independent travelers and they are still coming. People choose to respond to crises more positively than we think they will and I'm seeing very strong individual responses.

CNN: If Mumbai was a person what would he or she be like?

Deepa: This is a city which is strangely beautiful and strangely warty. At its heart this city is about money, it's a city of exchange and commerce, so it would be a trader or a wheeler dealer -- someone who's on the move, making deals and making money!