(CNN) -- Actor and producer Anil Kapoor has long been a Bollywood luminary, but after his award-winning performance in global hit "Slumdog Millionaire," he is set to become an international star. 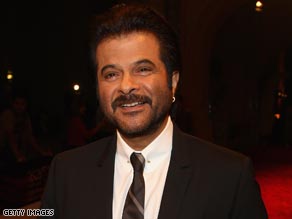 Kapoor says that "Slumdog," a love story about a boy from a Mumbai slum who wins a fortune on quiz show "Who Wants To Be A Millionaire?," resembles his own life story. "I also started from scratch, went from rags to riches," he told CNN.

Anil is part of the Kapoor family that is a veritable Bollywood dynasty. His father Surinder and elder brother Boney are film producers, his daughter Sonam, sister-in-law Sridevi and his younger brother Sanjay are actors, while son-in-law Sandeep Marwah is a movie magnate and Anil's son Harshvardhan is currently learning to direct movies in Los Angeles.

But things weren't always so glamorous. Anil Kapoor was born on Christmas Eve 1959 and grew up in a tenement in the Mumbai suburb of Chembur, with eight people living together in a single room. His father Surinder had yet to make his name in the film industry, but young Anil clearly had movies in his blood. "In my childhood I was surrounded by films, actors, film makers, directors and film talk. I would bunk school to watch movies," he said.

He was cast in his first movie aged just seven. Although the film was never released, the experience was enough to convince Kapoor that his future lay in the movies.

After finishing school he went to St Xavier's College, where he acted in plays and won the Best Actor trophy at an inter-collegiate competition, before being expelled for non-attendance. Kapoor responded by enrolling in acting classes and taking singing and dance lessons.

He made his Bollywood debut in 1979's "Hamare Tumhare," before moving on to Telugu-language movie "Vamsa Vriksham" in 1980, and landing his first Bollywood starring role in 1983's "Woh 7 Din."

Watch Anil Kapoor take CNN on a tour of Mumbai. »

Kapoor first met future wife Sunita Bhambhani in 1979, when she was a successful model and he was still a struggling actor. He decided that he would propose marriage as soon as he got his big break and 1984's "Mashaal" was the opportunity he'd been waiting for. Kapoor's performance won him Best Supporting Actor at India's prestigious FilmFare awards and he married Sunita in May of that year.

Kapoor cemented his status a Bollywood idol after starring in the hugely successful "Mr India," which promptly became his nickname among a growing legion of fans. He has gone on to become one of the biggest names in Indian cinema, picking up a total of five FilmFare awards and a National Film Institute Best Actor award for his role in 2000's "Pukar."

Following in his father's footsteps, Kapoor made his debut as a producer in 2002, with the comedy "Badhaai Ho Badhaai," and he went on to produce "Gandhi, My Father," which portrayed the fractious relationship between Mohandas Gandhi and his eldest son Harilal.

For years now, in his home town of Mumbai Kapoor has been mobbed by fans wherever he goes, instantly recognizable by his trademark mustache, which he has proudly sported in all but three of his hundred-plus movies.

But like most Bollywood stars, he received little acclaim outside India. That changed abruptly and unexpectedly with the release of low-budget British movie "Slumdog Millionaire." The film has become an international sensation, winning four Golden Globe awards and receiving an astonishing 10 Oscar nominations.

Kapoor's role as the creepy quiz show host earned him a share in the Screen Actors Guild award for Best Cast. In typically modest fashion, Kapoor dedicated the award to the film's child actors. "They deserve this award" he said during his acceptance speech. "It's the children who've done it, not us."

Kapoor remains proud of his roots, visiting his childhood neighborhood every year, and he is grounded enough to be aware of the social problems in Mumbai. He is a goodwill ambassador for Plan India, an organization that helps street children, and he donated his entire "Slumdog" fee to the cause.

As he prepares to travel to Britain for the Bafta awards and to Los Angeles for the Oscars, Mr India remains characteristically self-effacing. "I feel so humble and grateful. I never expected the film to be so huge and successful," he said.

Whether he's accepting awards in Hollywood or making movies for Bollywood, Kapoor seems sure to keep his feet on the ground.