How to survive a plane crash

LONDON, England (CNN) -- We tend to assume that if an airplane crashes our time is up. But recent experience and statistics tell a different story. 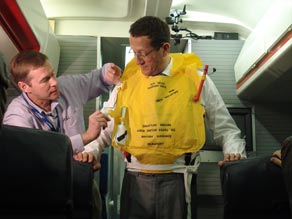 Out of the 134 people on board the Turkish Airlines flight that crashed at Amsterdam's Schiphol airport last week, 125 survived.

When the U.S. Airways plane ditched in the Hudson River, New York in January, every passenger and member of crew walked away.

Official statistics also offer some comfort. U.S. government data revealed that 95.7 percent of the passengers involved in airplane accidents between 1983 and 2000 survived. Even in the most serious crashes -- 26 in that period -- over half lived.

The industry-wide accident rate is just one accident per 1.2 million flights.

Safety advances implemented during the 1980s and 1990s, as well as improvements in staff training have helped to improve survival rates.

But passengers' decisions and actions could also mean the difference between life and death.

Ex-cabin crew run the BA Flight Safety Awareness course that has already given almost 9,000 delegates from safety-conscious companies the ability to become leaders, not followers in an incident.

The experts advise passengers to approach their flight with a clear mind, keep calm and heed the following advice.

Make a plan. When you board a plane, get in tune with your environment. Visibility will be reduced in a smoke-filled cabin, so count the number of rows between you and the two nearest exits.

Always listen to the pre-flight safety briefing and study the seat-back safety card. Don't assume you know it all, as every type of airplane has different safety instructions.

If you're sitting in an exit row, study the door and make sure you know how to open it. Cabin crew will not order you to operate the exit, so make sure you have confidence to take control in an accident.

Dress properly. You will need to be able to stay warm if you survive a crash so wear long sleeves and trousers and avoid wearing high heels as these must be removed before evacuating via an emergency slide.

Keep your seatbelt securely fastened. But also remember how it unfastens.

"It has been found that people who have survived emergency landings frantically search for where they expect the seatbelt to fasten [on the hip as in a car]," says Andy Clubb, BA Safety Course Director. "You often find bruising and cuts in that area," he added.

In 2007, Popular Mechanics magazine analyzed data for crashes since 1971 and found that more passengers near the tail of a plane survived crashes than those in the first few rows up front.

But in last week's Turkish Airlines crash, reports suggest that survivors were sat in the center of the plane. Many believe this section is safest because it is also the strongest part of the fuselage. That said, the fuel tank is also located in the center, warns Clubb.

A seat next to an exit does not always guarantee a speedy evacuation since some exits may not function after an accident.

And while an aisle seat may ensure an easier exit, you are also at risk from falling objects from overhead lockers. A errant bottle of duty free is also a more common occurrence than an air crash.

Check for a life jacket before taking off. It will be in a plastic casing usually under the seat.

Do not inflate your jacket in the plane. Many of the 123 who were killed in the crash of the Ethiopian Airlines Boeing 767 off the Comoro Islands near Africa in 1996 had inflated their jackets in the cabin. This meant that they were unable to dive and reach the exits when the cabin flooded.

Brace yourself for impact. The aim is to prevent being rapidly propelled forward. Return your seat to the upright position and lower your head to your knees or rest it on the seat in front of you.

Many of the victims and survivors of the M1 Kegworth crash of 1989 (79 of the 126 people on board survived) had legs broken below the knee as their legs were forced against the seats in front of them. So keep your feet as far back as possible.

And ignore Internet rumors that the brace position guarantees to break your neck and back to make death as painless as possible, says Clubb. It has been proven to minimize injury.

Jump. When it's time to leave the aircraft, exit will be by slide. Jump feet-first, arms folded across chest and lean forward.

And if you hesitate, Clubb warns, a member of cabin crew is likely to push you.