(Budget Travel) -- Last October, more than 40 people followed signs depicting a skull and crossbones, with a knife and fork in place of the bones, to a secluded Bavarian-style hunting lodge 30 minutes north of St. Louis. 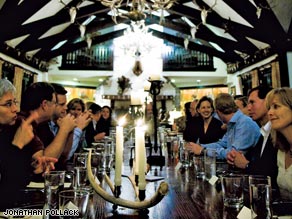 An Entre dinner party was hosted in a Missouri hunting lodge.

The attendees didn't have any idea where they were headed or what to expect. All they knew was that they were in for a five-course meal courtesy of John-Jack, an undercover chef who'd invited each of them via a top-secret e-mail to the latest of what he calls his Entre dinner parties.

Guests arrived to a bluegrass band jamming in a room decorated with deer antlers. As a fire crackled in the massive stone fireplace, they dined on wild-elk medallions, home-cured bacon, grapefruit confit, and butternut squash ice cream -- and toasted their good fortune with pumpkin ale from nearby microbrewery Schlafly.

Welcome to the world of underground supper clubs. Getting a reservation requires a little detective work, but once in, you may never go back to eating out the old-school way again. The idea behind these dinners is to let talented chefs work their whisks in an affordable, relaxed setting.

And since they're often operating out of their own kitchens, without a license to serve the public, these cooks have to keep the locales, and their own identities, under wraps. Budget Travel: The utterly random dinner party

"The trend started in food-centric cities like San Francisco, but in the last year, groups have been popping up across the country," says Jenn Garbee, author of "Secret Suppers," which spotlights some of the more than 80 clubs now up and running in the U.S.

One such is Guerrilla Cuisine, founded by an incognito cook in Charleston, South Carolina, who uses the alias Jimihatt and wears a ninja mask at his gatherings. As at many clubs, diners must submit their reservations weeks in advance on Jimihatt's Web site and then wait for an e-mail with directions to the hush-hush locale.

Based on his track record, you won't be disappointed: The bearded Jimihatt and his rotating crew of sous-chefs have served secret, Southern-style suppers (andouille sausage gumbo, Cajun smoked chicken, chocolate beignets) in galleries, wineries, even a grocery store. Budget Travel: Haute diners

Jimihatt now has a little friendly competition from an Atlanta cook named Lady Rogue. Her RogueApron shindigs each have a different theme. At a recent event, a Great Depression-style repast in Lang-Carson Park, guests stood in a soup line for pancetta minestrone with porcini mushrooms, and lemongrass-spiked corn broth. Then they divided into teams for an impromptu game of Wiffle ball.

"Our goal," Lady Rogue says, "is to make dining more inclusive and to have strangers connect over food. What better way to meet people?"

For those hoping to break bread with their own buddies, there's 12B in Vancouver. To keep operations simple, its mastermind, Chef Todd, hosts the six-course dinners in his own apartment, hence the name. And unlike most supper clubs, 12B cooks only for groups of friends (up to 12 at a time). Budget Travel: Pay-what-you-like restaurants

"Even after working 16-hour days, I would sit at home and think, 'I've got to find a way to feed more people,'" Chef Todd says. Money isn't the incentive. His minimum-donation fee of $50 just covers costs for a feast (stuffed artichoke hearts, five-mushroom ravioli, butter-poached scallops served with BBQ pulled pork) that would average twice as much in a restaurant.

But as Chef Todd will attest, these clubs are less about saving and more about spending a night eating exceptionally well in the unlikeliest of places, whether a cozy lodge straight out of a fairy tale or a humble living room.

Entre, St. Louis, Missouri, http://danssouslaterre.com/, five-course meal from $45, including a wine pairing with each course