(CNN) -- Hong Kong is well suited to providing a quick hit of urban thrills and retail therapy, but time-pressed visitors can also get a glimpse of another side of the city away from the shopping malls and neon-lit streets. 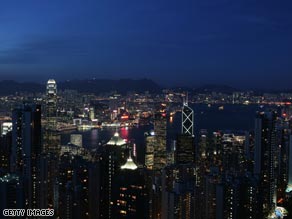 It's not hard to find things to do or places to go at any time of day or night.

A trip to The Peak is a good point from which to begin the day. Home to some of Hong Kong's most expensive properties, it's also the place for an unbeatable view, smog and weather permitting.

Catch a tram there from next to the tranquil Hong Kong Park -- where early risers practice their tai chi -- or take a cheap taxi ride, which can whisk you there in a few minutes.

A clear morning will reveal the city's high-rise buildings and skyscrapers unfurled below, with Kowloon and the green and mountainous New Territories in the middle distance.

The pay-to-enter Peak Tower will also give you a view of the southern side of Hong Kong Island and the South China Sea, although a short walk round Lugard Road is a more rewarding way to take in the city below and work up an appetite.

Hong Kong is a restaurant city and dim sum, which refers to a variety of light dishes like dumplings, is a city staple that can be enjoyed at any time in this 24-hour city. It's most commonly taken as a mid-morning meal.

Head back down towards Hong Kong's Central district, center of the city's finance and banking industry that funded the striking skyscrapers. The Luk Yu Tea House on Stanley Street is an oak-paneled gem that retains its charm despite its popularity: it's a fine spot for tea and dim sum.

For even more local flavor, pull up a plastic stool at a "dai pai dong," or street restaurant, situated further along Stanley Street, for cheap, quick, tasty eats.

1. Visit the south side of Hong Kong island, beach-bums should head to Shek O
2. Take a hike in the New Territories a feel a million miles from the city
3. Explore some of the outlying islands easily reachable by ferrry

If you're in the city on Sunday, Maxim's in Wan Chai is one of the few places where dim sum is still served by aging trolley dollies. Flag them down as they trundle past; point, eat and enjoy. You can't book a table but it's worth a visit for the atmosphere and harbor backdrop as much as the food.

Hong Kong is one of the most densely populated places on the planet, but its bustling streets are easy to navigate, helped by the affordable and plentiful taxis and an efficient public transport system. The city's skinny trams are a throwback to a different era and worth jumping on for a short journey just to watch the city go by: consider it a good chance to digest lunch.

While the city is generally unsentimental when it comes to preserving its old architecture, Sheung Wan, well within walking distance from Central, can give you a better feel of the city away from the shiny malls and new office buildings. From Queens Road, jump on the escalator (yes, escalator) all the way up to Caine Road and wind your way back down the hill.

The Dr Sun Yat Sen Museum and some incense-burning temples are nestled among the evocative streets, where you'll also find galleries and independent shops. The area is subject to increasing gentrification, so stroll down Gage Street while you still can: its market will soon disappear as part of the area's redevelopment.

Head towards the piers to catch the Star Ferry to Kowloon. Take one of the vintage green tugs -- as iconic as the city's skyscrapers -- from Central Pier to Tsim Sa Tsui (commonly referred to as TST) on the other side of the harbor.

As shopping is more of a way of life than a pastime for many Hong Kongers, you'll find you're never far from luxury brand outlets. TST offers just as many consumer delights as anywhere in the city.

Away from the air-conditioned glitz of TST's Harbour City shopping plaza, or the boutiques around Granville Terrace, the streets to the north of Yau Ma Tei have a more visceral feel where shopping is no less popular and goes on until late at night, especially at the bargain-paradise for watches and bags, the "ladies night market" on Tung Choi Street. Even if shopping isn't on the agenda it's a great place for people watching and getting a sense of the energy of the city.

From the throng to a bit of flash: early evening cocktails at Felix or Aqua bar should revive any weary spirits. The swank factor here is high, but there are killer views. They are also great vantage points for the lights and laser show that illuminates the skyscrapers on Hong Kong Island every night at 8pm.

On the island side, Sevva's balcony is next to the HSBC building, where you can feel closer to the lights and laser action while enjoying some well-mixed cocktails.

Horse racing, like shopping, is another Hong Kong passion and if you're in town on a Wednesday race night, losing a few dollars at Happy Valley racetrack is great entertainment, as well as a glimpse into the expat social scene.

Finding a place to eat dinner is never a problem, but for a night on the town head to Central's Soho (here it means South of Hollywood Road).

Lan Kwai Fong is the main honey-pot for the bar crowd, but there's better to be had around Peel Street, Staunton Street and -- for extra posing potential -- Wyndham Terrace, where the bars and restaurants stay open late, late enough at least until the clubs open their doors.