Make the most of Johannesburg

(CNN) -- One of the most cosmopolitan cities in Africa, Johannesburg is multicultural and multifaceted. Make the most of your time there with these tips. 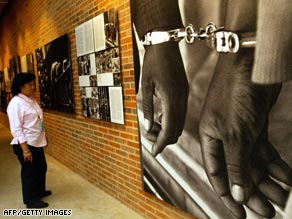 The Apartheid Museum is an often disturbing view of South Africa's troubled past.

On arrival, visitors are randomly allocated a pass labeling them as white or non-white, referencing the apartheid pass laws that obliged black South Africans to carry identity passes at all times.

Harrowing multimedia displays and news footage recreate the brutality of the apartheid era, while nooses hanging from the ceiling represent the political prisoners executed under the system.

Less bleak are the tributes to those who fought against the injustice of that era, paving the way for equality and democracy in today's South Africa. The museum is open between 10 am and 5 pm (GMT +2) Tuesday to Sunday. Admission is R30 ($3.20). For more information visit http://www.apartheidmuseum.org/

Meaty treat
The Carnivore is one of the city's more unusual restaurants. A few miles outside Jo' burg proper, on the Muldersdrift Estate, The Carnivore is designed to satisfy your primal meat cravings.

As well as the usual chicken, lamb and beef dishes, this eatery offers an intriguing selection of big game dishes, including crocodile, giraffe and ostrich.

There are veggie options available for those who aren't tempted by the thought of slow-roasted impala, but if you choose the vegetable lasagna you may never find out if crocodile really does take like chicken.

Day tripping
Jo' burg is well positioned for some interesting day trips. Pretoria is just 50km away, but has a very different to feel to Johannesburg, offering more of an insight into Afrikaans history.

The Voortrekker monument and museum, just outside the city, celebrate the pioneer spirit of the Boer and their "Great Trek" from the Cape to the country's interior.

If African wildlife is more your scene, head to The Lion Park, a small nature reserve about 25km north of Johannesburg. It's not the full safari experience, but you will get to see lions, cheetahs, antelopes, zebra and impala, among other local fauna.

What are your tips for Johannesburg? Let us know below.

Get around
Too big to explore on foot, Jo' burg is a driver's city. Public transport is generally poor and minibus taxis and the Metro train are crime hotspots.

There are plenty of car-hire outlets in the city but if you'd prefer someone else to do the driving City Tours offer minibuses to destinations including Soweto and The Lion Park. The advantage of a tour is that your guides can offer a local's insight into the city's history and culture.

Crime
There's no doubt that progress has been made in reducing crime over the last couple of years, but it remains a problem in many parts of the city.

ATMs are a magnet for criminals. Be sure to only use ATMs in well-lit areas and be wary of people offering to help you use them.

If you're driving, keep the car doors locked at all times and don't open the windows too wide. Keep your wits about you when stopped at traffic lights and when you're getting into and out of the car, and keep your valuables out of sight.

Put bluntly, it is not safe to walk around most of Johannesburg after dark.