(CNN) -- When Michele Maro became captivated by "The Lord of the Rings" movies, she never imagined she would one day be walking around in the Shire, touring Hobbiton and peeking into hobbit holes. 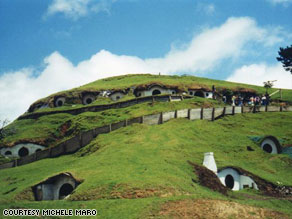 Fans of the "Lord of the Rings" trilogy can tour a New Zealand farm that was used as the setting for Hobbiton.

Those are all fictional places, but fans can visit the closest thing possible in New Zealand, where the trilogy was filmed and where specially designed tours will take visitors to some of the stunning locations featured in the movies.

Maro, who lives in St. Petersburg, Florida, spent two weeks in New Zealand in 2003 being guided around forests, national parks and farms, exploring sites that she didn't think were real when she first saw them on the big screen.

"The scenery was so pretty that I thought it had to be computer-generated," Maro said.

But the place that moved her most was a serene sheep farm in Matamata, New Zealand, where filmmakers brought to life author J.R.R. Tolkien's vision of Hobbiton, the hobbit village where Frodo Baggins lives, complete with hobbit holes peeking out of hill sides.

"I just stood there and cried. It was like, 'I can't believe I'm actually here,' " Maro said. "I loved the movie so much, and to actually be there where they filmed that, it overwhelmed me."

Sing along with 'The Sound of Music'

Such passion has prompted tour operators all over the world to take fans to sites that have served as settings for blockbusters on the big and small screens. They can be legendary places recognized on their own or seemingly mundane restaurants, houses and street corners that become instantly recognizable when put in the context of a favorite movie or TV show.

In London, England, you can visit locations used in movies such as "Bridget Jones's Diary" and "Four Weddings and a Funeral." When in Rome, Italy, world-famous landmarks like the Spanish Steps, the Trevi Fountain and the Colosseum will make you feel as if you've stepped right into "Roman Holiday" and "La Dolce Vita."

Tours highlighting sites used during the filming of "The Sound of Music" have many visitors singing with joy in Salzburg, Austria.

"The buses were packed. It seemed to be very popular," said Kelly Van Baren, a sales manager who lives in suburban Chicago, Illinois. She and her sister watched the musical over and over while growing up, she recalled, and when they visited Munich, Germany, in the fall of 2007, they made a special one-hour train trip to Salzburg just to take one of the tours.

It turned out to be an adventure in itself. A convoy of three huge buses with scenes from the film painted on their sides shuttled mostly American tourists to various sites, including the church where the main characters were married and a gazebo featured during some of the musical numbers, Van Baren recalled. Her favorite site was a majestic palace used as the von Trapp family home in some of the exterior shots.

The movie was played on the bus during the tour, and the sightseers were encouraged to sing along, prompting Van Baren to wonder what the locals must think of the visitors.

"It was just hilarious, these three giant buses full of Americans driving around the countryside. It wasn't a proud moment, but it was fun," Van Baren said.

Movie and TV fans who want to stay closer to home to explore famous locations have plenty of movie tours to choose from in the United States.

New York, which has served as the backdrop for countless films and television shows, offers a wide variety of sites. Seeing them in person for the first time can be shocking, tour operators say.

"Guests are definitely surprised by the appearance of the locations," said Pauline Gacanja, public relations and marketing assistant for On Location Tours. "On TV, things generally look larger and more dramatic than they really are."

The company takes about 100,000 visitors a year to dozens of well-known sites around the city by bus, by water taxi or on foot. Buildings used as homes in "Friends" and "The Cosby Show" are among the most popular places, Gacanja said.

Visitors can also see locations such as the diner used in "Men in Black" and the firehouse used in "Ghostbusters," according to the company's Web site. But the most popular tour focuses on sites used in the television and big screen hit "Sex and the City," Gacanja said. Fans of "the Sopranos" also have their own tour.

Stops include the Soup Shop that inspired the "Soup Nazi" episode and the real Monk's Restaurant, used for the exterior shots of the diner where the characters hung out. This may be the only tour that tempts visitors with highlights such as "Visit the office building where Elaine worked for Pendant Publishing, Kramer had his coffee table book published and George had sex, on his desk, with the cleaning lady."

For Maro, the experience in New Zealand was so unforgettable, she went again a year later for another look at "The Lord of the Rings" sites.

"My imagination went wild there. It was so fabulous. It was just a great trip," she said.

All About Movies • Travel and Tourism