24 hours in Lagos: The city that never sleeps

(CNN) -- If Lagos were a person, he (or she) would be described as "mad, bad and dangerous to know." 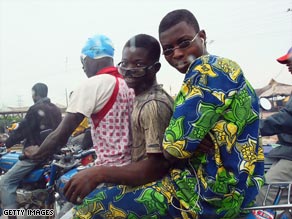 Locals get about in traffic-heavy Lagos on motorcycles known as okadas.

But we all know that these types of people are usually the most exciting kind. They are a lot of fun and you just never know what's going to happen when they're around.

By the same token, any visitor to Lagos should prepare for the unexpected -- it can feel like a literal assault on the senses from the moment you step off the plane and feel the intensity of the dense tropical heat.

Lagos is big, brash and bold and creaks under the weight of the 17 million people who live there.

The former capital of Nigeria, Lagos remains its economic nerve center and teems constantly with the buzz of buying and selling (usually performed at the top of the vendors' voices.)

There's only one volume level in Lagos and that's loud. From the constant tooting of horns in the snail-paced traffic, known locally as go slows, to music blaring from homes round-the-clock, the city buzzes constantly with noise.

Getting around is not easy and you will be caught in the frequent go slows, where you will be confronted by vendors selling all manner of things, from English football team merchandise to dinner sets to plantain chips to frozen yogurts. Locals often joke they can kit out their entire home in a short car journey.

The city is divided into three islands adjacent to each other and the mainland. Most expatriates and employees of multinationals, that proliferate in Lagos, are based on two of the islands; Ikoyi and Victoria Island.

The vast majority of wealth in the city is concentrated on these upmarket islands, with their western-style shopping malls and entertainment complexes.

The best restaurants, bars, boutiques and galleries can also be found here and it's best to stick to these areas to make the most of your time in Lagos.

A stay in Lagos would be incomplete without visiting one of the lively and colorful markets like the Balogun market off Breadfruit St, Lagos Island. It is not for the meek or faint-hearted but you're guaranteed to get a bargain or two if you're prepared for a good haggle.

It's great for African prints and carvings but is a maze of a market, so best to hop on the back of popular motorcycles known locally as okadas to help you navigate it.

To relax from all that haggling, you can head down to one of the five beaches in the city -- the best of them is Tarkwa Bay -- a small beach at the entrance to the Lagos port. It is easily accessible by boat from Tarzan Jetty at Maroko (around $6 per person) or under Falomo bridge on Victoria Island.

At Tarkwa Bay you can browse through some local African arts, cloth or even locally produced honey brought round by the occasional hawker. For a spot of lunch, make like locals and indulge in some "pepper fish" or suya -- very spicy chunks of meat, similar to kebabs, cooked over a charcoal grill), washed down with ice cold beer.

For authentic Nigerian cuisine that won't give your stomach too much "wahalla" (trouble), the Yellow Chili restaurant on Oju Olubun Close, Victoria Island is recommended. Those with an adventurous palate can order the special delicacy of Isi-Ewu - goat's head, while others can tuck into jollof rice and chicken or spicy bean cakes (moi-moi) -- a favorite with most Nigerians.

For a spot of culture, a short taxi ride away is one of the city's main attractions, the National Museum on King George V Road, Onikan. It opened in 1957 and houses bronze sculptures and ivory carvings from Benin dating back 300 years.

Is Lagos the most exciting city in Africa? Use the Sound Off box below to have your say.

If you are in the market for some art, you can pick up some tasteful, but admittedly, not cheap, Nigerian art at the Bogobiri boutique hotel in West Ikoyi. The hotel owner's brother, Azu, will take you to his studio where you can see the artists at work.

Lagos is a see-and-be-seen place and later you can party at one of the most fashionable places in town, Caliente on Goriola Street, off Adeola Odeku Street, a fun cocktail bar with a South American vibe and salsa dancing.

Lagosians also let their hair down over a bucket of champagne or two at Bar Ten in Saka Tinubu Street, owned by Nigerian football star Jay Jay Okocha. There's no chance of missing it as his name is engraved with golden letters above the entrance! Be prepared to empty your wallet though, as Lagosians are big spenders.

However, if your taste is less opulent, visit one of the numerous beer parlors found on every street corner and which are open 24 hours a day. Lagos is a city that never sleeps.

For those staying on the mainland, check if musician Femi Kuti is in town on a Sunday and go to "The Shrine", Ikeja - the home of Afrobeat. This is an amazing experience reminiscent of his dad, the legendary musician Fela Kuti. Or you can catch the current king of Afrobeat, Lagbaja at his club Motherlan' on Opebi Road, Ikeja.

The clubs don't kick off in earnest until around 10pm and you can party well into the night, just don't forget to make it in time for your flight home!