Sample the vibrancy of Vietnam in Ho Chi Minh City

HO CHI MINH CITY, Vietnam (CNN) -- To feel the vibrancy of Ho Chi Minh City, all you have to do is step out onto a bustling city street. 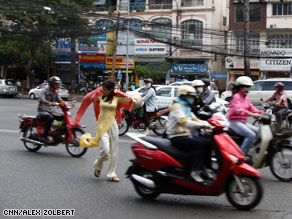 Step to it: Walking through the city's streets is the best way to see it.

Negotiating the roads, chock full of motorbikes and an increasing number of cars, can be daunting. But copy the fearless locals -- they don't break stride and never retreat -- and put your fate in the hands, or throttle, of the city's drivers who seems masterful at avoiding each other.

A good place to kick off a visit is on one of the main drags, Le Loi, a street that runs through the heart of the city. Near one end is the picturesque Opera House, as well as the majestic City Hall or "People's Committee Building" (this is still a communist country of course).

You shouldn't have to do too much motorbike dodging down Lei Loi and after just a 15 minute stroll from City Hall is the famed Cho Ben Thanh Market. However give yourself more time to stop into galleries or buy a classic piece of communist propaganda along the way.

The hundreds of stalls at Cho Ben Thanh offer a mix of traditional culture and tourist kitsch. You can sit with the locals and sip a solid jolt of Vietnamese coffee then move on to shopping for touristy T-shirts and "authentic chopsticks". Many of the stalls feature signs saying the prices are fixed. But if you're prepared to drive a hard bargain, or buy in bulk, that idea can be amended.

It's also worth a return trip later on in the evening when the market closes and street side restaurants spring up, offering great meals at cheap prices.

If you're looking to get away from the strip of Western hotels in the city center, hail a cab and head over to Cholon, or Ho Chi Minh City's Chinatown. In the late 18th century, this enclave was actually a separate city from old Saigon but the two were united in the early 1930's.

Today Cholon is home to the Binh Tay Market, which the locals call "Cho Lon." Just don't confuse it with Ben Thanh, or you'll be right back where you started. The area is filled with plenty of local color and is a photographer's dream.

Despite mass consumption of bottled water and the finest sunscreen, you'll need to find a way to beat the heat in Ho Chi Minh City. One of the best ways is to make regular stops at any restaurant or café for a refreshing lime soda. A bowl of the traditional Pho (pronounced "fuh") is also a must.

It's said that this simple dish -- consisting of noodles, beef and broth -- was created at food stalls in Hanoi nearly a century ago. But even in Ho Chi Minh you need to walk only a few feet before coming across a food joint claiming to serve the city's best Pho.

In a place with stifling heat and the motorbike madness, an afternoon rest is a wise move, especially if you want to partake in the nightlife. Another dose of Vietnamese coffee will surely have you revived in no time. Or, if you're in need of some pampering, try a foot massage at any of the countless establishments -- to play it safe and avoid "additional services" get a suggestion from any hotel concierge.

Is Ho Chi Minh City the most exciting city in Asia for a short break? Have you say in the "Sound Off" box below.

If you're keen to try to play foreign correspondent -- or at least see where they gathered during the days of the Vietnam War - look no further than the Rex Hotel on Nguyen Hue Boulevard. The drinks are wildly overpriced and the crowd seems to be on the "5 Asian Cities in 7 Days" tour, but its large rooftop does offer a great bird's eye view of the lively streets below.

The nearby Temple Club on Ton That Thiep Street offers a quieter setting for a cocktail. Diners also give great reviews for the food. Afterwards, stroll over to Vasco's on Hai Ba Trung Street. The French colonial style building features bands playing away upstairs with large lounges on the veranda, while downstairs you can settle in for a more mellow night.

If your 24 hours in Ho Chi Minh City happens to turn into 36 or 48, arrange a day trip to the Cu Chi Tunnels, about 70 kilometers Northwest of the city. The Viet Cong built this maze of passageways, which served as supply lines, during the Vietnam War. The narrow tunnels snake underground for a staggering 200 kilometers. Not only can you take a stroll, or crawl, through a few parts of it, you'll also be served a unique dose of communist propaganda.

Most trips to Cu Chi also include a stop at the very colorful and unique Cao Dai Temple in Tay Ninh.

If these options don't hit the mark, you can always accept an offer from one of the countless "moto drivers." They'll have you on the back of their bike and whizzing through the streets in no time. Just hold on tight. And maybe close your eyes.