(CNN) -- Given that Moscow has been home to the likes of Tchaikovsky, Dostoyevsky, Rachmaninoff and Pushkin, it's no surprise that the city offers a wealth of cultural events. But Muscovites are also prepared to brave their bitter winters to enjoy traditional outdoor celebrations. 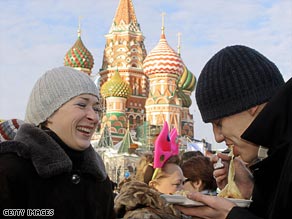 Pancakes, known as blini, are the stars of the Maslenitsa Festival.

Maslenitsa Festival/Blini Week (February/March)
This traditional festival, with its roots in pagan Spring celebrations, all but disappeared between 1917 and 2002, but it's now one of the city's best-loved celebrations. It precedes Lent and Russian pancakes, known as blini, feature prominently in the week-long festivities.

Round, golden blini are said to symbolize the Spring sun and are eaten in huge quantities all week, topped with anything from jam to caviar.

The festival usually includes an attempt to break a blini-related world record; in 2004 the festival set the record for the tallest pile of pancakes ever made and at the 2008 festival bakers created a map of the world out of, you guessed it, blini.

Held over three weeks at venues around the city, the festival is a fantastic opportunity to experience the best in contemporary culture from all over Russia, conveniently gathered together in one city.

What do you think are Moscow's seasonal highlights? Let us know below.

Victory Day (9 May)
Victory Day is a national holiday in Russia to commemorate Germany's surrender to the Soviet Union in World War II -- still known in Russia as the "Great Patriotic War."

In Moscow, the day is marked by an impressive military parade in Red Square and remembrance events in Victory Park to honor Russia's fallen soldiers. There are firework displays in the evening.

Part somber remembrance, part celebration, Victory Day is a dramatic reminder of what many Russians still regard as the Soviet Union's proudest hour, and of the millions of Russians killed in the war.

December Nights (December)
Just as Moscow's December chill is turning nights on the town into an endurance contest, the Pushkin Museum of Fine Arts comes to the rescue with a series of outstanding evenings of classical music.

Conceived by renowned Russian pianist Svyatoslav Richter and held annually since 1981, December Night's program of Russian and international musical talent is one of the year's cultural highlights. As well as world-class classical concerts, the festival also features exhibitions of artworks related to that year's musical theme.

Winter Festival (late December/early January)
Given the ferocity of Moscow's winter, if you're planning to join in with the Winter Festival fun in Izmailovo Park you'd do well to warm up with a shot or two of vodka before you venture outside.

In the park you'll find traditional folk music, dancing, and troika rides, while elsewhere in the city you can see glittering ice sculptures being built in Red Square and hundreds of snowmen lining Arbat Street.

While some hardy Muscovites use the festival as an opportunity to join the "Walrus Club," it isn't recommended -- membership involves swimming in ice holes carved in the freezing Moscow River.