Gold and glitz in the 'New Moscow'

(CNN) -- The domes of Moscow's fairytale churches aren't the only things in the city that glitter gold. In recent years the global commodities boom swelled the ranks of the nouveau-riche "New Russians," whose wealth, and eagerness to dispose of it, has helped build a "New Moscow." 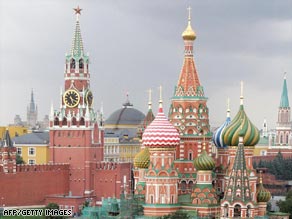 The New Russians' disposable incomes have turned Moscow into a city regularly cited as the most expensive in the world.

One product that's proved especially popular in the post-Communist shopping spree is cars. Russians bought more than three million new cars last year and nowhere is that more evident than in Moscow, a city where it's perpetually rush hour, the streets gridlocked with flashy sports cars going nowhere fast.

All that new money led to a real-estate gold rush that has seen property prices rocket like a Sputnik. Skyscrapers have sprouted all over the city's skyline, challenging the onion-domed cathedrals and Stalin's imposing "Seven Sisters" towers for aerial dominance.

Those who fear that the city's historical buildings are in danger of being literally overshadowed by modern monoliths might take comfort in the global economic crisis, which has caused some of Moscow's most ambitious new developments, including Norman Foster's 600 meter-high Russia Tower and 450 meter Crystal Island building, to be put on hold.

But the recession hasn't yet downsized Moscow's notoriously decadent nightlife. Dominated by showy nightclubs and a "face control" policy that sees doormen turning away clubbers whose image doesn't fit the venue's, what the clubbing scene lacks in innovation it makes up for in energy and high-end hedonism.

But to focus on the "New Moscow" is to ignore a culture as rich and impenetrable as can be found anywhere in Europe. The Pushkin Museum is world famous for its collection of impressionist paintings and the Tretyakov Gallery is an outstanding showcase for Russian art.

But fittingly for the New Moscow, the Bolshoi Theater, home of Russia's illustrious ballet and opera companies, will remain closed until 2011 -- while it is being refurbished and modernized.

Following the demise of Soviet Union the city's Russian Orthodox churches have undergone something of a revival, symbolized by the resurrection of the magnificent Cathedral of Christ the Savior -- dynamited by Stalin in 1931 and rebuilt in the 1990s.

Moscow's places of worship provide some of the most visible reminders of the city's Tsarist past. To step through their heavy doors is to step back in time, their walls lined with gold-leafed icons, the air heavy with history and incense.

Some see the re-emergence of the church as a sign that the New Russia has left some longing for the certainties of the past, and there are other indications that some Muscovites are struggling to adapt to a changing Moscow.

There is an undercurrent of xenophobia and nationalism in the city, with people from the Caucasus a common target. Resentment towards foreign workers is perhaps the reaction of a population trying to adapt to the realities of globalization after so long isolated from the rest of the world.

While corruption and organized crime still exist, Moscow has lost its "wild west" reputation of the 1990s. It has become a city of opportunity, the place where Russia's natural resources turn first into rubles and then into real estate. If Moscow emerges from its recession with its relish for growth intact, it will no doubt continue to evolve into one of the most intriguing and exciting cities in the world.