By Hannah Kane
For CNN

LONDON, England (CNN) -- Russian supermodel Natalia Vodianova's life has been a classic rags-to-riches fairytale, taking her from poverty in provincial Russia to a cosmopolitan life of wealth and aristocracy. 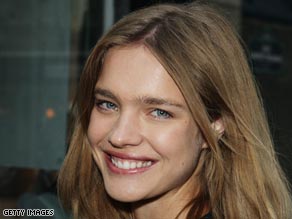 Supermodel Natalia Vodianova was discovered in Moscow in a classic rags-to-riches tale.

Her intelligence, poise and charm (as well as stunning features and long limbs), have propelled her from anonymity to being one of the most recognizable and respected models in the fashion industry.

Her success has earned her the nickname Supernova.

Not content to grace the covers of glossy magazines and the catwalks of the world's glamorous fashion capitals, Vodianova has also carved a role as a philanthropist.

In 2005 she founded the Naked Heart Foundation, a charity that builds playgrounds for children across Russia.

"Giving back just feels so great and I always try to open each play park with myself being present for the children because it makes it more special for them. I go to very remote parts of Russia that are far from Moscow and it gives these children an extra message of love," she told CNN.

Vodianova was born on February 28 1982 in Nizhni Novgorod, the fourth largest city in Russia. She lived in a poor district of the city with her mother and two sisters, one of whom has cerebral palsy.

The young Vodianova was regularly taken to the opera and the ballet by her grandparents. They offered some respite from the troubles at home and taught her the importance of manners.

When Vodianova was 11 she began to help out on the family's fruit stall, and at the age of 15 she had moved into her own apartment with her best friend.

"It was a lot of survival and a lot of struggling but overall we were a good team," Vodianova told CNN.

"We worked really hard, all of us, and stood up for each other. My mum was amazing -- she lived for us. I appreciate what she has done for me and the way she raised me"

In 1999 a Parisian model scout held an open casting in Nizhni Novgorod. Vodianova impressed him and he sent her to Paris to sign with Viva Models on the condition that she learn English within three months. Luckily for her she took his advice.

A year later Vodianova would find herself settled in Paris and sitting at a dinner party in the Pompidou Center restaurant. It was there she met artistic, English aristocratic playboy the Honorable Justin Portman, third son of the late Viscount Edward Henry Berkeley Portman.

See Natalia Vodianova's life in front of the camera. »

The Portman family is one of the wealthiest in Britain, owning over 100 acres of prime land in central London and 3000 acres in Herefordshire, as well as expansive properties in Antigua and Australia.

The pair fell in love and after a quick civil wedding Vodianova gave birth to their first child, Lucas, in December 2001, when she was still only 19.

Vodianova lost a huge amount of weight after the birth and just a few weeks later at the castings for Paris Fashion Week she was the clear favorite among the designers. She opened and closed the prestigious Yves Saint Laurent show, as well as 40 other runway bookings and landed a Gucci perfume campaign, shot by iconic fashion photographer Mario Testino.

On September 1 2002 Vodianova and Portman were married again, this time in a ceremony at St Vladimir's Cathedral in St Petersburg, followed by a lavish reception for 110 guests at the Palace of Catherine the Great.

Over the next few years two more children followed. Her daughter Neva was born in March 2006 and another son, Viktor, was born in September 2007.

She "officially" retired from the catwalk after Valentino's emotional final show, during the Spring/Summer 2008 season. Afterwards, Vodianova took Valentino for a well-deserved holiday to her much-loved city of Moscow.

"Moscow is the heart of my country so it gathers the best of what I love about my country - and I can find it all here in this place. I love the people, I love what I find here, I love being here and it's sad that I don't actually live here. It would be my dream" Vodianova told CNN.

Following a brief return to the catwalk for Diane Von Furstenberg and Balenciaga at the end of 2008 the supermodel is now fronting campaigns for Calvin Klein and David Yurman jewelry.

At the age of 27 Natalia Vodianova has achieved more than most people could ever dream of. She's got age on her side, as well as beauty, fame and fortune, and yet she remains admirably grounded.

"The most important things to me are my children, my family and my husband. It's really about people in general -- I really love people and I try to never say no if someone needs my help."