By Deborah Rivers
For CNN

MOSCOW, Russia (CNN) -- Natalia Vodianova is the Russian supermodel and philanthropist described by designer Tom Ford as "the most beautiful woman in the world." 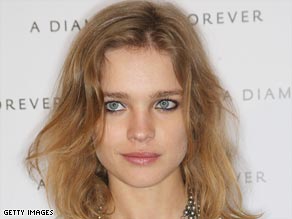 Natalia Vodianova: "I think protecting your family and giving to them is the most important achievement."

Natalia, 27, is a mother of three and has set up her own children's charity. The woman nicknamed "Supernova" tells My City_My Life about her tough childhood, her love of Moscow and why Russian vodka is the best.

CNN: How would you describe Moscow?

Natalia Vodianova: It's a city of contrasts. You have this great culture and traditions that are very normal, calm and established. And then you have explosions of emotion, craziness, art, and young people who are so proud to be Muscovites and really trying to be individuals.

Moscow is a huge inspiration for me. I love what I find here, I love being here.

CNN: What would you change about Moscow given the chance?

NV: Definitely the way it's treated at the moment, the way the government wants to renovate the old buildings. To me it's a little bit sad because in the West people have a very different mentality about renovating buildings, keeping them as intact as possible.

Watch Natalia Vodianova take CNN on a tour of Moscow. »

CNN: What's the fashion in Moscow?

CNN: Tell me about your childhood

NV: I was born in Nizhny Novgorod to a very poor family and unfortunately my father and mother separated when I was very little.

She was a single mum and had two more girls. It was a struggle but we all worked really hard and stood up for each other. My mum was amazing; she never drank, she never smoked -- she lived for us. I appreciate what she has done for me and the way she raised me.

CNN: Is family very important to you?

NV: I think protecting your family and giving to them is so important. It's the most important achievement.

CNN: How did your modeling career take off?

NV: I went to Paris when I was 17. I was lucky because my career kind of gradually built up over two years -- I always had good work but I wasn't a star straight away.

In fact, my agency thought that I might never do shows because I was a bit shorter and not skinny enough, but when I gave birth to my first son I was 19 and I lost a lot of weight.

I guess the stress on the body was extreme and I suddenly just turned into this stick -- just the way designers love models. My career took off after Lucas was born because I opened a lot of shows on the runway and that's where a lot of stars are made in my industry.

CNN: If you weren't a model, what would your life be like?

NV: It's very hard to say what my life would be like if I hadn't gone to Paris. People say I didn't change very much but I don't think that's true.

I'm a happy person and even if I thought that I was happy then, I had so much baggage to carry with me: my background, people's expectations, the fact that I wasn't a perfect student and I wasn't going to school all the time -- I didn't live a normal life at all.

That's not with me anymore, because of my success. It really doesn't matter because I know I have learned so much more than a lot of other girls who have had perfect childhoods.

CNN: Tell us about the charity and what you are trying to achieve with it?

NV: I started my foundation in 2005, after the Beslan tragedy [the 2004 school siege in which at least 339 hostages were killed]. I was in Moscow at the time and it just struck me so much.

I went back to New York, where I was living at the time, organized a fundraising event and raised $350,000 to build a playground for the children that had survived in the area. I believe that play is very therapeutic. It's really the only way for these children to forget about what happened and just be children, even if it's only for five minutes.

But then I realized that it would be good for all the other children in Russia and I just started raising money and building playgrounds. Now we have 23 places all over Russia and we are building 15 more this year and planning to build more.

NV: Our vodka is definitely the best. It's a very pure, good drink and it goes with Russian food. Generally I don't drink vodka outside Russia, but when you come to Russia there is no reason to order a glass of wine.

CNN: What do you think of your nickname -- Supernova?

NV: I don't mind being called Supernova. If one nickname is going to stick, that's not a bad one!