LONDON, (England) CNN -- Natalia Vodianova is best known as the supermodel who has graced the cover of Vogue, walked the catwalk for the likes of Chanel and Versace. 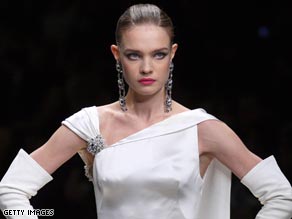 But Vodianova has a dream that couldn't be further from the glitzy world of fashion -- to build 500 play parks in her native Russia.

Vodianova, born and raised in Russia, was in the country during the 2004 Beslan school siege, in which at least 339 hostages, around half of them children, were killed.

Deeply affected by the tragedy she returned to New York, where she was living at the time, determined to do something to help the surviving children.

Vodianova organized a fundraising event that generated $350,000 to build the children a playground and she founded her charity, the "Naked Heart Foundation."

With an ethos that play is not only therapeutic for children, but a necessity, the foundation aims to provide playgrounds for Russia's urban youth. So far the charity has built 23 playgrounds around the country, starting in her home town of Nizhnii Novgorod, and there are 15 more in the pipeline.

"For me, since I started my charity, it has been a very different way of life," Vodianova told CNN.

"Giving back just feels so great. I always try to open each play park with myself present for the children, because it makes it more special for them. I go to very remote parts of Russia are far from Moscow and it gives these children an extra message of love."

For Vodianova, this is just the start. She told CNN that her dream is to build 500 play parks in Russia.

The charity's play parks can cost anywhere between $27,000 and $400,000, depending on their size and range of play equipment. Vodianova admits, "It's a big dream -- an expensive one!"

When it comes to fundraising, Vodianova's secret weapon is her connections in the fashion world. Last year she organized a "Love Ball" in Moscow -- a Valentine's Day fundraiser that counted among the guests the likes of designer Valentino, actress Lucy Liu, singer Natalie Imbruglia, and supermodel Eva Herzigova.

The event was held in a former royal residence, Moscow's 16th century Tsaritsino Estate. It featured an ice palace made from 220 tons of ice and music provided by British band Razorlight, among others.

The highlight was a Valentine's-themed auction, with lots including a private performance from rock star Bryan Adams, bought for $120,000, and a painting by British artist Damien Hirst called "Love is All Around," which sold for $1.6 million. The auction alone raised $6.7 million for the charity.

Vodianova admits that the global economic crisis is making it harder to get sponsorship for this year's event and says it will be more low-key than last year.

"We are not going to make it a very extravagant event; it's very disrespectful of what's going on in the world right now, with the recession and a lot of people losing their jobs.

"We're not gong to spend a lot of money on it, but it's important to keep going," she told CNN.

With a husband and three young children, Vodianova says it can be hard to divide her time between family, career and her charity.

She describes her charity work as a 24-hour job. "I feel a huge sense of responsibility for my foundation because it's really very important to me. Somehow it became my most difficult baby to raise," she says.

But she has no doubt about the value of her work, both for Russia's children and herself.

"The biggest thing I can do for my soul is to hear that laughter and to see all these children that come and play on the play parks that my foundation built."